The Microsoft Surface Duo is one of the most unusual smartphones released in 2020. It’s a Microsoft smartphone that runs Google’s Android operating system with some custom Microsoft apps pre-installed. It’s a foldable, but rather than a single foldable display it has two screens connected by a hinge. And it had specs that were already a bit long in the tooth when the phone launched in 2020, but that didn’t stop Microsoft from slapping a $1400 price tag on the phone.

Now Microsoft has dropped the starting price to $1000 in the United States and, as promised, the company is getting ready to begin shipping the phone to customers in other countries.

The Microsoft Surface Duo will be available in Canada, the UK, France, and Germany starting February 18th. And it’ll cost a pretty penny (or local currency equivalent) in each new place where it’s available. 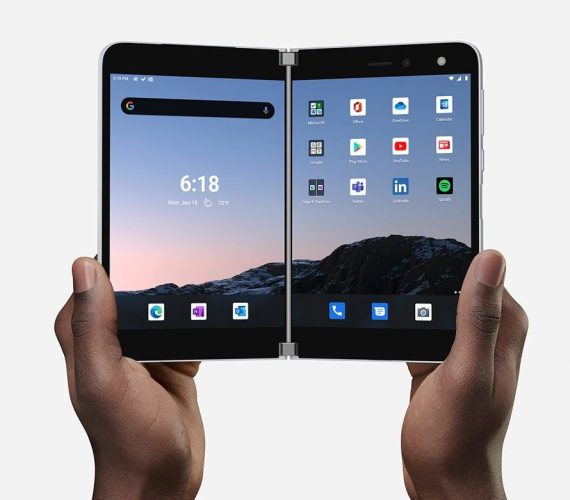 According to a report from The Verge, the Surface Duo will cost:

Those prices are the equivalent of $1864, or $1879 in US dollars, respectively, which seems like a lot of money to spend on a device that features a Qualcomm Snapdragon 855 processor, 6GB of RAM, and 128GB of storage (or 256GB if you’re willing to pay a bit more.

But this phone isn’t just about basic specs. The 360-degree hinge and dual-screen setup make it unlike anything else on the market. The Surface Duo has two 5.6 inch, 1800 x 1350 AMOLED displays with a 4:3 aspect ratio and 401 pixels per inch.

Unfolded, that gives you 8.1 inches of display area and the equivalent of a 2700 x 1800 pixel, 3:2 display. But since there’s a line that runs down the middle where the hinge is, it’s best to think of this as a dual-screen device rather than a foldable tablet with seamless design and a large unfolded display.

Among other things, you can use the two screens to view different apps on each display, or to bring up a virtual keyboard or other input device on one screen while leaving the other display totally unobstructed.

Early reviews described a buggy software experience, and that the unusual design and screen shape made the Duo awkward to use as a phone. But Microsoft has been plugging away at some of those software issues. And some folks have suggested that the best way to think of the Duo is not as a phone, but as a new type of device altogether.

Anyway, with Microsoft expanding availability of the Duo to new markets, now more people will have the opportunity to make up their minds for themselves about whether the Duo is a product worth buying… assuming they’re willing to pay a premium price to find out.