It’s been years in the making, but Microsoft has finally introduced a Surface Phone. But it’s much more than just a smartphone with the Surface name.

The Microsoft Surface Duo is a dual-screen device with two 5.6 inch displays that create an 8.3 inch surface when unfolded, a 360-degree hinge, and Surface Pen support.

Basically it’s what you would get if you took the upcoming Microsoft Surface Neo and shrunk it… and loaded it with Android rather than Windows.

Like the Neo, the Microsoft Surface Duo is scheduled to ship in time for the 2020 holidays. 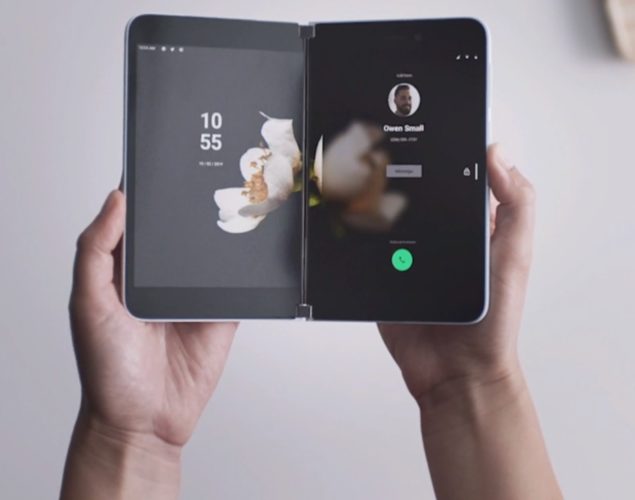 While Microsoft didn’t provide detailed specs during its Surface event today, Wired Magazine reports that the current version is powered by a Qualcomm Snapdragon 855 processor — although I wouldn’t be surprised if that changes by the time the Surface Neo is ready to ship.

The Duo is an intriguing device for a number of reasons.

It’s the first new phone from Microsoft since the company abandoned Windows 10 Mobile a few years ago. And while the company has been making big plays for the mobile software space in recent years by focusing on Office, Cortana, and other apps and experiences for mobile devices, this will be first-party hardware with a third-party operating system (albeit one that’s heavily customized to look and work like Windows 10 X, apparently).

It also comes at a time when other companies are trying to use pricier (and more fragile) flexible OLED displays in order to blur the lines between smartphones and tablets. While the dual-screen approach means that there will be a line between the Surface Duo’s two screens (plus some pretty chunky top and bottom bezels), I suspect it could also mean the Surface Duo will be more affordable than the (easily breakable) $1,980 Samsung Galaxy Fold, for example.

We’ll likely learn more about the Surface Duo in the coming year as Microsoft gears up to release the product to the public.