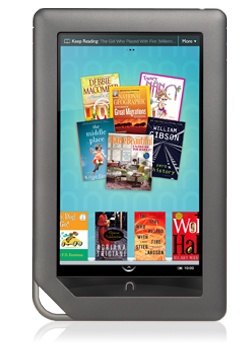 Microsoft is continuing its fight against Android… not just by focusing on Windows tablets and Windows Phone 7 smartphones, but also by taking legal action against companies producing Android devices that Microsoft says are in violation of the company’s patents. Last year Microsoft sued Motorola over patent infringement in some Motorola smartphones. Now Microsoft has announced that it’s filed legal actions against Barnes & Noble, Inventec, and Foxconn.

The Barnes & Noble NOOK and NOOKcolor eBook readers are both powered by Google Android. Microsoft says the “Android platform infringes a number of Microsoft’s patents,” and is seeking to have Foxconn and Barnes & Noble license Microsoft’s intellectual property for use in the tablets.

Foxconn and Inventec are the Taiwanese manufacturers that build the NOOK devices for Barnes & Noble… as well as a pretty large percentage of the consumer electronics available in the West.

It’s too early to say whether this action could kill the Barnes & Noble NOOKcolor or raise the price of the Android tablet and eBook reader. But if you’re in the market for a $249 Android tablet, now might be a good time to pick one up.