Microsoft has been making smartphone operating systems for just about as long as anyone, and the company started selling its own hardware under the Lumia brand after acquiring Nokia in 2014.

But Android and iOS continue to dominate the smartphone market and Gartner estimates that Windows had a market share of just about 1 percent last year.

So it’s not surprising that Microsoft is making changes. The company has announced it’s eliminating about 1,850 jobs in its smartphone hardware business, taking a $950 million restructuring charge, and shifting focus. Moving forward, Microsoft CEO Satya Nadella says the company will focus “phone efforts where we have differentiation — with enterprises that value security, manageability, and our Continuum capability, and consumers who value the same.” 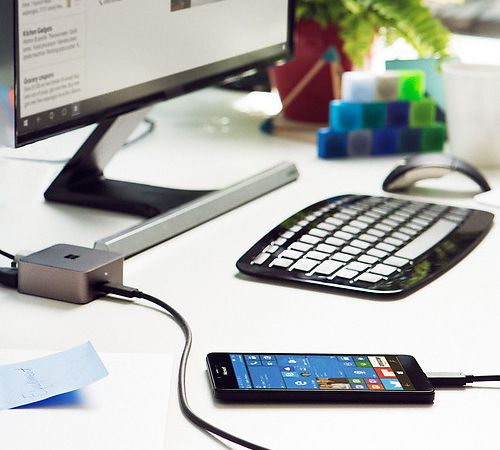 The announcement comes a week after Microsoft announced it was selling its feature phone business, a month after the company revealed that it sold only 2.3 million Lumia phones in the previous quarter (down from 8.6 million a year earlier), and less than a year after cutting 7,800 jobs in the phone division and taking an impairment charge of around $8 billion.

In other words, this whole phone thing hasn’t been working out too well for the company.

That said, Windows 10 Mobile does have some interesting features, including the Continuum software that lets you use a phone like a desktop PC by connecting a mouse, keyboard, and external display to a docking station. The experience might not be perfect, but it does provide a way to use one device as both a smartphone and a desktop, complete with support for Microsoft Office, among other things.

And the Universal Windows Platform allows the same apps to run on phones, tablets, desktops, and other devices… assuming developers create apps for the platform. Unfortunately, with Windows holding such a small market share in the mobile space, a lot of developers seem to have decided against creating Windows versions of apps that are available for other platforms, such as Android and iOS. Sure, there are already millions of programs that can run on Windows desktop computers, but they’d need to be converted to UWP apps before they could run on phones.

Microsoft does plan to continue supporting existing Windows phones, and in a letter to employees, Windows and devices chief Terry Myerson notes that “we’re scaling back, but we’re not out!” of the smartphone space and that the company will continue to “develop great new devices.”

So it sounds like the long-rumored Surface Phone could still be in the works.

In the meantime, Microsoft is selling its most recent flagship phone for $150 off.