If you have a cheap Windows 8.1 tablet with just 16GB or 32GB of storage you might notice something odd when you upgrade to Windows 10 later this year: according to Microsoft, you should have more free space.

That’s because the company has done two big things to make its operating system’s footprint smaller. 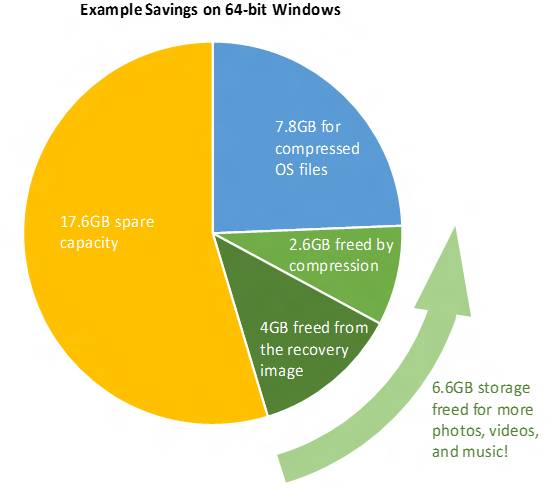 Microsoft actually launched a configuration utility called WIMBOOT last year, which allows system builders to free up space in much the same way. But computer makers had to choose whether to use WIMBOOT when installing Windows. It wasn’t automatic and it wasn’t something most users could do by themselves. So few Windows 8.1 devices actually use WIMBOOT.

Since compression could have a negative impact on performance on slower computers, Windows 10 will automatically analyze your computer to determine whether it can handle compression and it will only be used on devices that have enough RAM and fast enough processors.

Compression will also be applied automatically to apps downloaded from the Windows Store.

Somewhat ironically, if you do have one of the few devices currently using WIMBOOT, Microsoft doesn’t currently offer a way to update to Windows 10 — because there’s probably not enough space on your computer to hold Windows 8.1, the Windows 10 installer, and the Windows 10 operating system. Microsoft doesn’t erase your Windows 8.1 files immediately upon starting the upgrade process because if there’s a problem, it may be necessary to revert.

The other major change in Windows 10 is that Microsoft is making it unnecessary for PC makers to include a full recovery image in local storage. This can free up between 4GB and 12GB of storage.

Instead, if you need to reset your computer to factory settings, Windows 10 will use its own runtime system files.

As an added bonus, this means that after restoring the computer you’ll have the latest version of Windows and won’t have to download every single Windows update that rolled out since Windows was first installed on your computer.

On the other hand, if you do want to be able to restore your system to an earlier state or you’re worried about what would happen if your system storage becomes corrupt, Windows 10 will also have tools for creating recovery media on a DVD or flash drive.

24 replies on “Microsoft shrank the Windows 10 footprint to free up space on cheap tablets, notebooks”