A few weeks after releasing software development kits for its upcoming dual-screen products, Microsoft has launched a Windows 10X emulator that lets developers test apps designed for the upcoming operating system optimized for dual-screen devices — like the upcoming Microsoft Surface Neo, which is expected to ship in time for the 2020 holiday season.

The new emulator joins the Android dual-screen emulator the company had already released for dual-screen devices like the upcoming Microsoft Surface Duo smartphone. 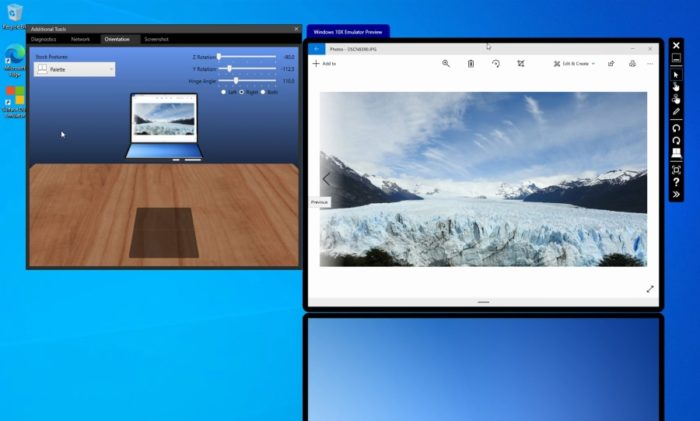 Windows 10X is basically Windows under the hood, which means that existing Windows applications will work just fine when running in a single window. But developers can also take advantage of new tools to create apps that can be spanned across both displays, or designed to show different content on each screen and/or to adapt to different orientations.

Microsoft is also noting that Windows 10X will include some key under the hood changes — the operating system borrows a few tricks for security and speedy updates from Chrome OS and Android, for example.

The down side is that not every Win32 app will work in a container — apps that install drivers for example, won’t be able to function.

Microsoft says Windows 10X will also download and install operating system updates in the background. When everything is ready, all you need to do is reboot the computer and within 90 seconds you’ll boot into the new version of the OS. This is a feature that Chrome OS has had since it first launch, and which made its way to Android as well in recent years.

While Windows 10X is designed specifically for dual-screen PCs like the upcoming Surface Neo, Microsoft is also encouraging developers to adapt web apps for dual-screen products thanks to a new set of JavaScript and CSS tools.

You can read more about Microsoft’s vision for dual-screen devices in its blog post for developers.