It’s April Fools’ Day, and while some companies are taking the opportunity to joke about artisanal selfie sticks or smart desk phones, others are going the extra mile and releasing working products. Google’s Pac-Man layer for Google Maps was actually playable. The OnePlus DR-1 flying drone was actually available for purchase (briefly). And if you haven’t visited com.google yet today, you really should.

Microsoft, meanwhile, is getting back to basics and bringing MS-DOS to Windows Phones. 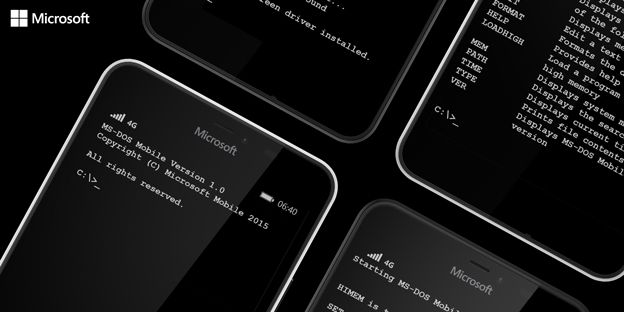 Install the MS-DOS Mobile app on a Windows Phone device and you’ll be greeted with a C:\prompt. Enter text-based commands including CD to navigate between folders, and if you go tothe Program Files folder you’ll even find apps you can launch by typing camera.exe, sms.exe, or phone.exe to see text-based versions of those apps.

The MS-DOS camera will even let you snap photos using ASCII art. Launcher Internet.exe and you’ll get the default web browser… but not after hearing the sound of an old-fashioned telephone modem handshake.