On supported hardware, Windows 8 can boot really, really quickly. That’s because Microsoft has changed the way the boot process works and designed it to take advantage of systems that use UEFI instead of a BIOS.

The long and short of it is that a Windows 8 computer may be able to go from zero to fully operational in under 10 seconds. That’s pretty cool — unless you want to get into your advanced boot options for some reason. It turns out there’s just not enough time to hit the F8 key. So Microsoft changed the way it handles advanced boot options. 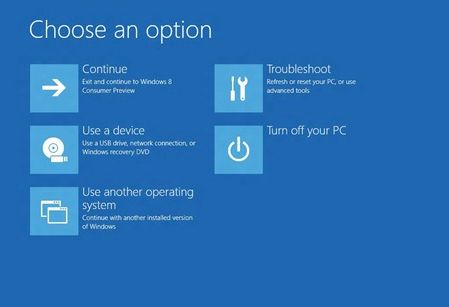 When you install Windows 8 on a current computer with an old-school BIOS you’ll probably still be able to hit F2 to enter setup, F8 to get to advanced boot options, or other key combinations.

If you want to enter the advanced boot menu manually you’ll need to launch Windows and then reboot your system. You can either choose Advanced Startup from the Windows 8 system settings, hold the Shift key while pressing Restart from the Start screen, or enter “Shutdown.exe /r /o” (without quotes) in a command prompt.

Once you get to the boot menu you’ll be able to continue to a full boot, boot from a DVD or USB device, load another instance of Windows, or troubleshoot problems.

Some options will only be available on systems with UEFI while others will also show up on BIOS systems.