Windows 8 might represent the biggest change in Microsoft’s flagship operating system since the jump from Windows 3.1 to Windows 95. While the desktop view looks a lot like earlier versions of Windows, Microsoft added a full-screen, touch-friendly Start Screen and support for a whole new class of full-screen apps.

The idea was to treat touch as a first-class citizen, and every Windows 8 computer has elements that are designed for both touch and keyboard and mouse input… whether or not those devices actually have touchscreens.

Some folks have been happier about the changes than others… and Microsoft is taking user feedback into account with the next version of Windows. Today the company is providing an early look at Windows 8.1.

Desktop mode and the return of the Start Button

One of the first things laptop and desktop users will notice is that, as rumored, the Start Button is back. You don’t have to scroll your mouse over the lower left corner of the screen to see a pop-up icon. Instead there’s a button that’s always there.

But clicking that button won’t bring up an old fashioned Start Menu. Instead it’ll take you to the same full-window Start Screen that you’ve always gotten with Windows 8.

Microsoft is allowing users to set the default Start Screen view to “all apps” if they’d rather skip the Live Tiles view.

The Start Button is hidden by default when you’re running a full-screen Windows app, but hovering your mouse cursor over the left corner will bring it back into focus, letting you move back to the Start Screen without hitting a key on your keyboard or pulling up the Windows Charms menu.

While some folks find this distracting since it effectively minimizes any other apps you were looking at until you’re done, I’ve never really had a problem with the new Start Screen. I treat it like a keyboard app launcher. Just hit the Windows icon on your keyboard, start typing the name of the app you want to launch, and hit enter once it appears to launch the app. Now you’re back in desktop mode.

If you really never want to see the Start Screen, just pin your most used apps to the Windows taskbar or create desktop shortcuts for them.

Microsoft is also letting users bypass the Start Screen at boot. There’s an option to boot straight to the desktop.

Windows 8 lets you set a custom image as your Lock Screen background. Windows 8.1 will let you choose multiple pictures to create a slide show.

You can also snap a photo using your device’s camera from the lock screen without even logging into your computer.

Microsoft is also offering more color and background options for the Start Screen. That includes backgrounds with motion, much like the Live Wallpapers available for Google Android. 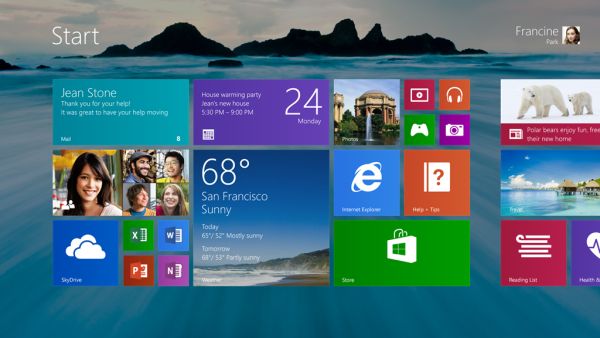 Or you can use the same background for your desktop and Start Screen so that the jump from one view to another doesn’t feel as jarring.

Users will also be able to resize, rearrange, or uninstall multiple apps simultaneously.

While a key feature of Windows 8 is support for “Metro” style apps designed to run in full screen, Windows sets itself apart from Android, iOS and other touch-friendly operating systems by allowing you to “snap” two apps together so that you can see two different apps at the same time.

In Windows 8 that meant you could see one big app and one small app at the same time. Windows 8.1 lets you snap windows to any size you want. You can also now see up to 3 apps on the screen at once. If you have multiple displays you can have up to 3 apps per display. 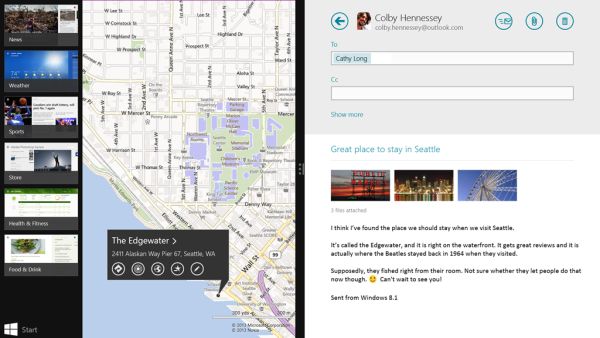 That means you can divide your screen so that you have two apps using up half the viewing space each, or split the screen 70/30, 30/30/40, or any other way you’d like.

You can also have more than two windows of the same app snapped together — so you could view two web pages side-by-side using a single web browser.

Microsoft is also updating the core Windows 8 apps including Mail, SkyDrive, Photos, and Camera with new features. And the Windows Store will show more information about available apps.

Microsoft is bringing global search to Windows 8.1. Now when you use the Search charm you’ll be searching the web, your device, and files uploaded to your SkyDrive account.

Results can include web pages, apps, music, videos, or other content depending on your search query.

Users can save files directly to Microsoft’s SkyDrive cloud storage service and access them from any device they’re logged into.

Microsoft will also sync settings and apps across devices, so logging into a new computer with your account will bring all of your preferences and software to a new device.

Internet Explorer 11 will also synchronize your opened browser tabs across multiple devices, so you can start reading an article on your laptop and keep reading on your tablet when you leave your desk.

When you’ll get it

Microsoft hasn’t said when Windows 8.1 will be ready for the general public, but the company has promised two things.

First, a preview build is due out on June 26th. Second, it won’t cost users a penny to upgrade from Windows 8 to Windows 8.1 when it is does hit the streets.

3 replies on “Microsoft provides an early peek at Windows 8.1”