Microsoft plans to buy Nokia’s Devices & Services division in a deal worth nearly $7.2 billion. About two thirds of that money would buy the portion of Nokia’s business responsible for making Lumia and Asha smartphones, among other things. The rest pays licensing of intellectual property.

The deal is expected to close in the first quarter of 2014, assuming it’s approved by regulators and shareholders, and it would mean that 32,000 Nokia employees would move to Microsoft — including Stephen Elop, who has been CEO of the company for the last few years.

That would come at a time when Microsoft also happens to be looking for a new CEO.

Nokia is already probably Microsoft’s most important smartphone hardware partner. The two companies have been working together since February, 2011 when Nokia announced plans to drop its Symbian and MeeGo smartphone operating systems to focus instead on Windows Phone.

Since then the Finnish company has released a number of handsets running Microsoft’s mobile operating system, including a range of models with attractive designs and stand-out features such as a 41MP PureView camera.

If the deal goes through, Nokia will continue to exist, but it’ll be a company focused on network infrastructure, mapping services, and technology development. It won’t make phones anymore or sell phones under its own name.

Microsoft, meanwhile, will likely continue to market phones under the Lumia brand, but they won’t have Nokia’s name on them anymore. The company is also acquiring Nokia’s Asha phone platform and may license that software platform to other manufacturers.

Update: It looks like the Lumia name is out.

While Microsoft plans to get into the smartphone manufacturing business soon, the company still plans to license Windows Phone software to other handset makers. Theoretically if the company can produce some excellent devices in-house and use them as a way to boost overall sales of Windows Phone hardware, that could provide incentive for Samsung, HTC, or other companies to offer phones with similar software.

Google acquired handset maker Motorola last year, and despite some grumbling from competitors, no major phone maker has stopped producing phones that run Google Android yet. But Google continues to run Motorola as a separate company, and hasn’t even chosen Motorola to build its latest Nexus devices. If Microsoft takes a much more hands-on approach with Nokia, it could lead competitors to wonder why they would compete directly with the company that makes the software they sell on their phones.

On the other hand, I suspect if Apple decided to start licensing iOS, there’d be plenty of manufacturers interested in putting it on their phones and tablets. 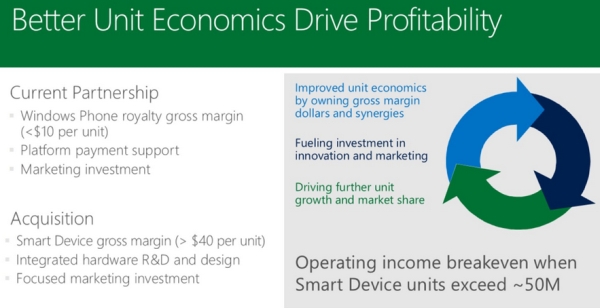 Right now, Microsoft makes about $10 for every Nokia Lumia phone sold. The company expects that to rise to $40. Microsoft is hoping to boost the market share of Windows Phone while saving hundreds of millions of dollars in “synergies” through its acquisition of Nokia.

It could be a while before this $7.2 billion acquisition pays for itself, if it ever does. But it shows that Microsoft is taking the mobile devices space very seriously at a time when growth in the desktop and notebook PC markets seems to be stagnating.