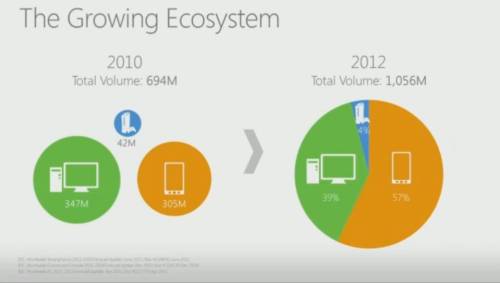 Once upon a time a computer was a big ole thing that took up a whole room. These days we tend to think of computers as desktop, laptop, or even tablet devices that don’t take up a lot of space, but which don’t fit in your pocket. But smartphones today have far more computing power than so-called personal computers of yesterday, and so do video game consoles such as the Xbox 360 or Playstation3.

So it should come as little surprise that Microsoft envisions a future where you’ll be able to run the same operating system across a range of devices including phones, game consoles, tablets, and PCs.

Speaking at Microsoft’s Worldwide Partner Conference, Andy Lees described how a single ecosystem could cover all of these devices.

Does that mean you’ll be able to run a full-blown version of Microsoft Office or Photoshop on your phone? Will you be able to make cellular calls from your desktop? Maybe. But my guess is that a few generations from now Microsoft will offer a version of Windows (or an operating system with a new name) that can run on multiple platforms — but not necessarily the same way on each.

Right now, for instance, you can run Windows 7 on a laptop, desktop, or tablet. But when you add a touch panel you get access to certain features that wouldn’t otherwise be present, such as support for flick-style gestures. When you’re using a mobile device, different power saving options appear. In the future, perhaps there will be a common core operating system, but it will behave differently on different devices — and the system requirements may vary depending on the type of device you’re using.

The key is that the core hardware and operating system may soon be the same whether you’re using a PC, TV, phone or other device. While Microsoft hasn’t quite gone as far as to say that a full-blown version of Windows will run on smartphones, the company is already bringing desktop-class software to mobile devices. Internet Explorer for the latest versions of Windows Phone, for instance, is already quite similar to what you get with Windows 7.

As for porting Windows Phone software to tablets, Microsoft instead insists that tablets should function as computers with access to full PC functions such as support for printers, networking, and USB peripheral devices. But the company has already ported some of the user experience of Windows Phone 7 to Windows 8, bringing touch-based controls to the desktop (and tablet) operating system.

The folks at This is My Next are pretty certain that all of this means that eventually Microsoft won’t have different operating systems for phones and tablets, but will instead offer a unified OS. I think it’s also possible that Microsoft will develop software that has certain core elements that are the same on different platforms — but which offers a different user experience on each device. In that world, Windows 10 for phones and Windows 10 for laptop computers may share an awful lot of code and be able to run many of the same applications without necessarily being the exact same operating system.

On the other hand, how cool would it be if you could just buy a state-of-the-art smartphone, plug in a monitor, mouse and keyboard, and never have to buy a laptop or desktop computer again? Somehow I can’t see a company that makes its money by selling multiple software licenses to the same consumer really pushing too hard in that direction though.