There are a growing number of Windows tablets with support for digital pens that let you write or draw on the screen or hover the pen over the display to move an on-screen cursor or perform other actions. And Microsoft is building a whole new “Ink Workspace” experience which will roll out to users with the Windows 10 Anniversary Update this summer.

But figuring out which pen works with which tablet can be a bit of a pain, because you generally can’t use a Wacom pen on a tablet with N-Trig technology, or vice versa.

Now it looks like Microsoft wants to create a new standard for interoperable pens. 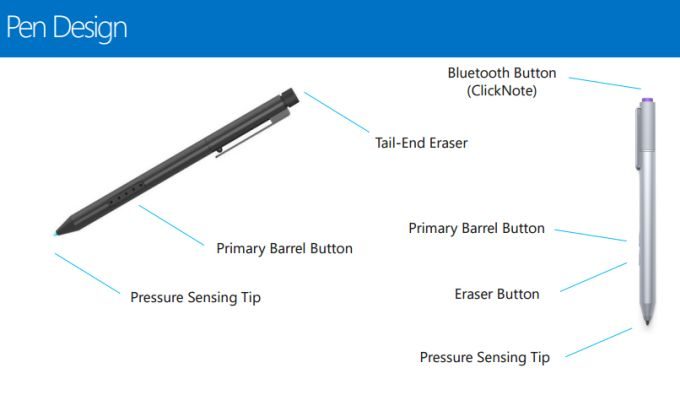 According to slides from a Microsoft WinHEC presentation, the Microsoft Pen Program provides a “turnkey solution for Windows Ink compatibility.” Basically pen and digitizer makers get a list of specs from Microsoft, and as long as they follow the guidelines (and get their devices certified by Microsoft), you should be able to able to use any pen that supports the Microsoft Pen protocol with any Windows 10 computer that also uses that protocol.

Initial partners appear to include Wacom, Sunwoda, and APS on the pen maker side, and Wacom, Elan, Synaptics, SiS, Goodix, EETI, and Atmel on the touch controller side.

Two different types of pens are displayed in the presentation. One has a tail-end eraser, while the other has a Bluetooth button where you’d find an eraser. There’s a separate eraser button near the front of the pen on that model.

Another interesting detail in the presentation is that Wacom’s Gen G13 pen & touch solution is set to launch in the fourth quarter of 2016. While the company currently offers a digital pen solution with 2048 levels of pressure sensitivity, the upcoming Gen G13 solution is said to support 4096 pressure levels as well as tilt detection and other new features.