Microsoft has launched a public beta of a Windows utility called PC Manager that helps you free up storage space, choose which apps run when you first boot your computer, and offers some basic security features including virus scanning.

It also has a “performance booster” that basically frees up RAM… something that Windows does automatically and is widely regarded by experts as offering placebo effects, at best. 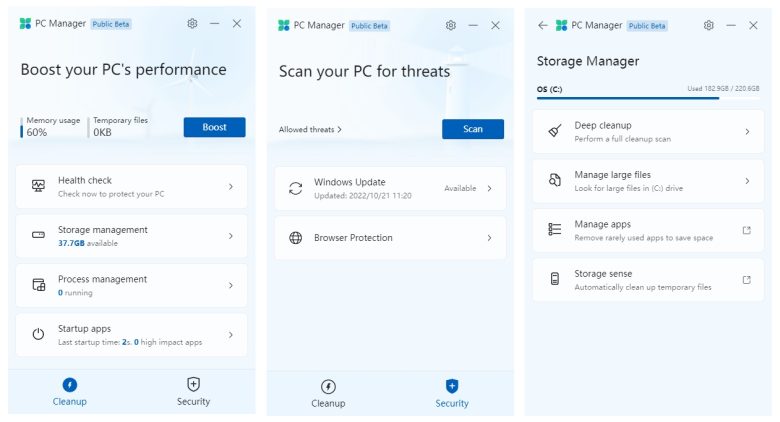 Spotted by @ALumia_Italia, Microsoft PC Manager is available as a free download from Microsoft… but right now it’s only available for download from a page that’s in Chinese. The app itself will run in English once installed.

According to the download page, PC Manager supports Windows 10 (build 1809) and later, which means that it should work on most PCs running Windows 10 or 11.

For the most part, PC Manager fills the same niche as third-party apps like CCleaner, although I suppose some folks might be more comfortable allowing a Microsoft app to scan their Windows PCs than giving a third-party tool the same kind of access.

The storage management features look pretty decent, giving you quick access to features that will help you locate and delete large files or applications that take up a lot of disk space. There are also shortcuts that will take you to the Storage Sense settings that are built into Windows, allowing you to create settings for automatically cleaning up temporary files. 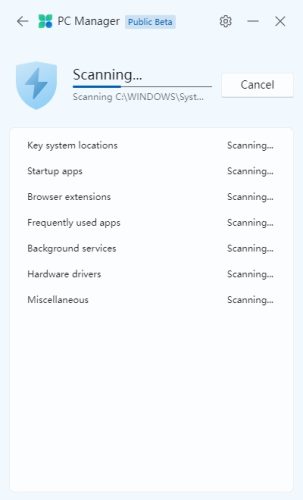 The Startup Apps feature is also helpful, helping you find applications that run automatically when you turn on the computer and disable them to free up resources. This can lead to slightly faster boot times and less competition for resources if an app you use infrequently is always trying to run in the background.

And there’s also a Process management feature that’s basically a simplified version of the Windows task manager, allowing you to kill running apps and processes that you don’t need, although I found it did a poor job of detecting running processes on my computer. But keep in mind that this software is still in beta.

Security features include a “browser protection” option that’s supposed to block changes from malicious apps, although I couldn’t get it to work on my computer (again, this is a beta). And there’s a virus scanner which, somewhat ironically, slowed my computer to a crawl when I tried running an in-depth scan.

So much for boosting performance.