Microsoft Office is finally available for iPhone, iPod touch, and iPad. There’s just one catch: You can’t just buy the app and use it. It’s available as a free download from the App Store, but you’ll need an Office 365 subscription to use Excel, Word, and PowerPoint on an iOS device. 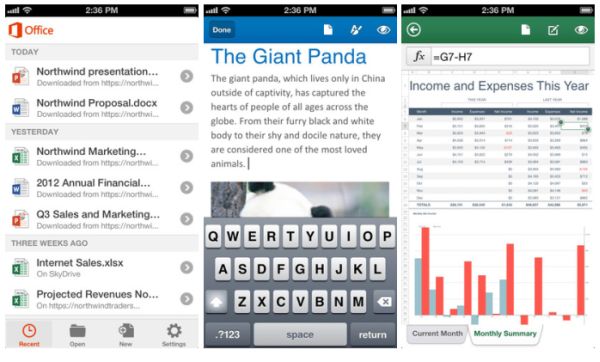 The software’s optimized for iPhone and iPod touch at the moment, but you can use it on an iPad too if you like. It runs on iOS 6.1 and later.

Microsoft Office for iOS lets you view and edit documents on a mobile device, access cloud documents from your SkyDrive or SharePoint account, view and edit Office documents attached to email messages, and even resume reading a document at the same point where you left off while reading on a PC. You can edit documents while offline and synchronize them across devices when you’re back online.

Office 365 is a subscription service that lets you use Microsoft’s Office software on up to 5 devices for an annual fee (instead of buying the software outright). You can use the new mobile app on up to 5 iOS devices as well, which means that one fee lets you use Office on up to 10 devices.

This is hardly the first time Microsoft has released a smartphone-friendly version of Office. Mobile apps have been available for Windows Phone (and Windows Mobile before that) for years. But Office Mobile is no longer exclusive to Microsoft’s mobile operating systems… which is a smart move, because there are an awful lot more people using iPhones than Windows Phone devices at the moment.

15 replies on “Microsoft Office hits iOS… for subscribers only”