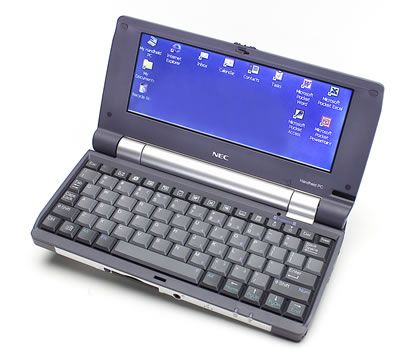 Long before the first Asus Eee PC, OLPC XO Laptop, or even the Psion netbook, there were handheld PCs running DOS and Windows CE. They were popular with a small group of tech enthusiasts in the 90s and the early part of this decade, but they sort of fizzled out long before the netbook craze started.

These old proto-netbooks offered stellar battery life and instant on/off capabilities, but ran stripped down operating systems with stripped down apps like web browsers and office suites. Probably the biggest problem is that over the last 10 years more and more of our computing needs have moved online, and older handheld PCs like the HP Jornada and NEC MobilePro line didn’t really keep up. Few handheld PCs came with integrated WiFi or 3G capabilities. And more importantly, they didn’t run modern web browsers like Firefox or Internet Explorer 7.

Of course, we’ve seen a ton of development over the last few years on mobile web browsers, showing that it’s possible to design a web browser like Safari, Opera Mobile, or even Internet Explorer Mobile 6 so that you can access modern web pages on machines with low specs. But HP, NEC, Sharp, and the other computer makers who were responsible for early handheld PCs discontinued their work on the form factor to focus on computers and cellphones.

But now the rise of the netbook has people thinking about reviving Windows CE as a mobile platform for mini-laptops with full keyboards. We’re starting to see companies working on new netbook-style devices with ARM processors instead of Intel or VIA x86 CPUs. These ARM-based machines will draw significantly less power than x86-based netbooks, which could lead to fantastic battery life. But you can’t run Windows XP, Vista, or 7 on a computer with an ARM chip. That pretty much means these upcoming netbooks will be running Google Android or some form of Linux. They could run Windows CE, but it appears Microsoft isn’t really spending much time focusing on Windows CE for ARM-based netbooks.

There could be a number of reasons for this. Microsoft might not want to annoy Intel, a company it works very closely with. Or Microsoft may be too busy trying to figure out how to make sure as many netbooks as possible will come preloaded with Windows 7, an operating system that could potentially be much more lucrative for Microsoft than Windows CE. Not only do Windows 7 licenses cost more, but the company sells a number of applications including Microsoft Office that will run on Windows 7. Windows CE comes with an extremely limited mobile version of Office.

The point is, while we’re likely to start seeing ARM-based netbooks popping up over the next year or so, I wouldn’t expect to see many of them running Windows CE. Or if they do, they may be running a rather old and outdated version of the OS.