Microsoft may have given up on making smartphone operating systems. But sometime next year the company may make it easier to run smartphone apps on a Windows laptop, tablet, or desktop computer.

According to Windows Central’s Zac Bowden, Microsoft is “toying with” the idea of “bringing Android apps to the Microsoft Store,” and the feature could arrive sometime in 2021. 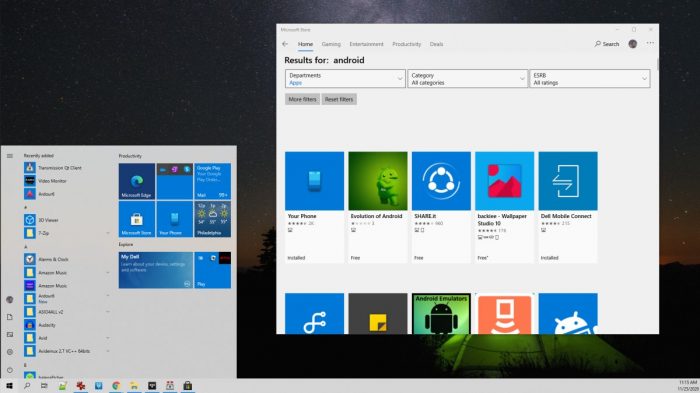 The move would have a few benefits.

First, while Windows 10 has a touch-friendly user interface that feels at home on tablets, there are far more touch-friendly apps designed for Android than for Windows. Allowing users to run Android apps would dramatically increase the number of tablet apps available to Windows users.

Second, the move would allow you to use the same apps on your PC that you already use on your tablet without having to find alternatives or get used to to a different user interface.

Third, the move could open the door to paying once for an app and accessing it on both your phone and tablet. But it probably won’t. Since the rumor is that Android apps are coming to the Microsoft Store, odds are that you’ll have to pay again for any apps that you’ve already purchased from Google Play if you want to get them again from the Microsoft Store. An exception may be subscription-based apps that use a third-party billing method (meaning you’d pay your newspaper subscription, for example, directly to the news publisher rather than paying via Google Play or the Microsoft Store).

But there are also a few reasons not to get too excited about the idea of Android apps on Windows PCs.

First, it’s likely that not all Android app would make the jump. Take a look at the Amazon Appstore for an example of a non-Google Play app store that has a much more limited selection of apps than Google’s official app marketplace. Spotify is there, for example, but Apple Music and Tidal are not. Netflix is, but YouTube is not. There’s every reason to think a similar situation would arise if Android apps came to the Microsoft Store.

Second, while Android apps would probably run well on Windows tablets and laptops with touchscreen displays, there’s some question of whether it makes sense to run touch-first apps on devices that don’t have touchscreens. Apple recently added support for running iOS and iPadOS apps on its new Macs with Apple Silicon chips (which do not have touchscreens), and the early reviews of the experience are not kind.

But the biggest reason I’m skeptical? Because it’s already possible to run Android apps on a Windows PC, and it has been for years. Tools like BlueStacks and GenyMotion have allowed you to basically install Android emulator on a Windows or Mac PC and then use it to install and run Android apps and games. And while the idea has never quite disappeared, it also hasn’t exactly taken off like wildfire.

Sure, the idea of downloading Android apps from the Microsoft Store and running them as if they were native Windows apps would be a bit less of a kludge. But I can’t help but think that if there was truly great demand for Android apps on Windows, people would already be using them.

In other news, according to Bowden, Microsoft is on track to release WIndows 10X in the first half of 2021, when it will position the new lightweight operating system as an alternative to Chrome OS – a version of Windows that offers enhanced security, long battery life, and decent performance… plus the ability to run Windows apps… and maybe Android apps, who knows?

Microsoft may also launched a Cloud PC service next year, allowing users to install and run apps on a virtual PC in the cloud and stream them to any device (think thin clients and other cheap, low-spec devices)… for a subscription price.

6 replies on “Microsoft may bring Android app support to Windows”