We live in strange times, when it’s possible to install a Linux distribution like Ubuntu or Debian as if they were Windows applications. While it’s not unusual to run one operating system within another using virtualization, what makes Windows 10 weird is that its Windows Subsystem for Linux (WSL) doesn’t require virtualization: you install your Linux distribution of choice and it lets you run GNU/Linux applications without rebooting or firing up a virtual machine.

Last time I checked, there were five different Linux distributions in the Microsoft Store. But now Microsoft is releasing tools that should make it easier for developers to bring more Linux distros to WSL. 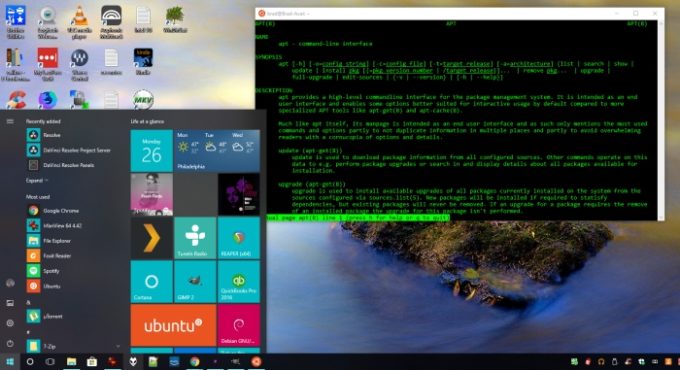 There’s a new open source sample that the company says will help distro maintainers “to package and submit” their operating systems as an app that can be included in the Microsoft Store.

But developers that don’t want to distribute through the Store can also prep their operating systems so they can be sideloaded onto a Windows 10 PC.

Keep in mind that Microsoft only officially supports running a command-line version of Linux, which means that apps with a graphical user interface won’ work (although there are workarounds). But once you’ve enabled WSL, you can fire up a terminal window and run command-line apps, add new applications, navigate filesystems, and even keep Linux apps running in the background after you close the terminal.

The feature is aimed at developers who want to be able to use Linux-only tools without having to switch computers or reboot their machine to switch operating systems. But it’s also useful for power users… or anyone who’s ever come across an online tutorial that’s written specifically for machines running Linux, but who don’t normally use GNU/Linux.

Of course, Linux power users being what they are, there are a number of folks who’ve figured out how to load a desktop environment and run apps with a graphical user interface.