When Microsoft launched Windows 10 last summer, the company promised it would be available as a free upgrade for the first year of availability for anyone running Windows 7 or later. And then the company started pushing the free upgrade hard.

First, the company pushed out a Windows Update that added an upgrade icon to the system tray. Then the company started tweaking the design of that notification — so that trying to close it could cause a user to inadvertently trigger an upgrade.

Now Microsoft vice president Terry Myserson says the company is updating the design of the upgrade notification to make it easier to understand… and easier to decline. 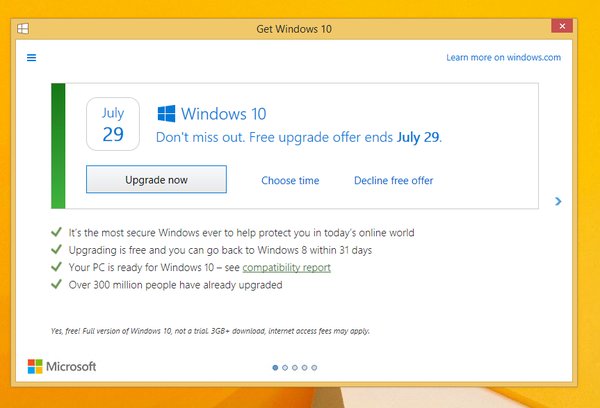 The planned change is coming kind of late in the game. Microsoft’s free upgrade offer is expected to end on July 29th, and it’s likely that the Windows 10 Anniversary Update will launch a few days later.

While the Anniversary Update is a free upgrade for anyone already running Windows 10, once the free update offer expires users who want to upgrade from an earlier version of Windows will have to pay full price for a license.

So why the change? It could have something to do with the fact that earlier this week news broke that Microsoft had reached a $10,000 settlement with a user that had a computer update without her permission (Microsoft admits no wrongdoing, but figured it was cheaper to pony up some cash than to continue paying lawyers to fight the claim).

via The Verge and Thurrott.com