As expected, Microsoft is launching a wireless display adapter that lets you beam content from a PC or mobile device to a TV.

What’s a little unexpected is that the wireless display adapter doesn’t just support devices running Windows and Windows Phone. You can also use it to stream content from a phone or tablet running Android 4.2.1 or later.

Microsoft plans to ship the adapter in October, and it’s available for pre-order now for $60. 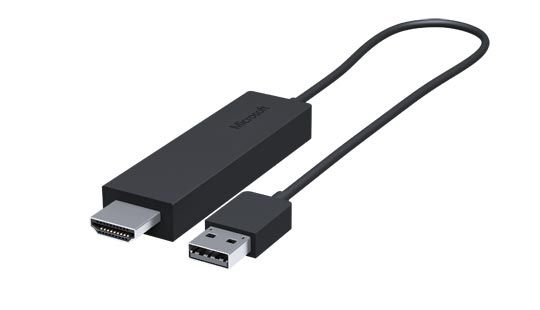 Like a Google Chromecast, the Microsoft Wireless Display adapter has an HDMI Port on one end and it connects to a USB port on your TV (or a wall jack if your TV doesn’t have one) for power.

Unlike a Chromecast, Microsoft’s adapter uses Miracast wireless display technology. This not only lets you stream videos from your phone, tablet, or PC to a TV. You can also use the adapter to mirror your screen or extend your desktop across multiple screens.

There are cheaper Miracast wireless displays on the market. You can find a number of cheap Chinese models at AliExpress for $20 or less. But I suppose it’s always nice to have another option.

Dell also recently launched its own wireless display adapter. The Dell Cast also lets you beam content from a mobile device to a TV… but it’s designed specifically to work with Dell’s Android tablets (and eventually the company’s Windows tablets too). What makes Dell’s $80 adapter a little different is that it also features WiFi and Bluetooth support so you can use a wireless mouse, keyboard, or other peripherals.