Windows 10 may be available to the masses, but that doesn’t mean Microsoft is killing its Windows Insider Preview program. As promised, anyone can opt into the program to receive early builds of upcoming versions of Windows.

Not only does this help you get a taste of feature before they’re more widely available, but it also helps you shape the future of Microsoft’s operating system by offering feedback. 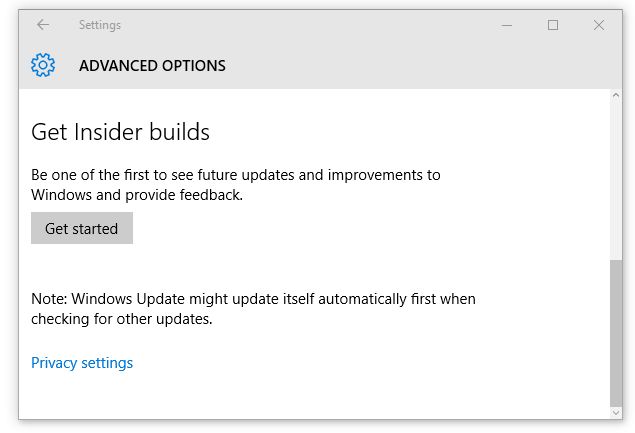 Microsoft has changed the default color options for Start, Action Center, Taskbar, and Title bars and made some memory improvements.

But it’s important to keep in mind that this is pre-release software. Known issues in this build include a problem that affects video playback in the Movies & TV app (an update is on the way), lack of support for optional language packs (for now), and a problem that keeps mobile hotspot from working.

This is just the first of many expected updates. Microsoft plans to roll out updates to Windows 10 as they become available, adding new features as well as bug fixes and other tweaks. But members of the Insider Preview program will help to test many of those updates before they’re released to the general public.

If you’re already a member of the program, the new update should be rolling out soon to members of the Fast Ring. You can also join the program at any time by opening the Windows 10 Settings app, opening the Updates & Security section, and choosing “Advanced options” under the Windows Update tab. From there, you should see an option to “Get Insider builds.”

Don’t like the idea of testing potentially buggy software? There may be one other reason to consider running the Insider Preview: you can continue using it for free, even if you haven’t paid for a Windows 10 license.