Cloud storage doesn’t grow on trees (or clouds)… although you’d be mistaken for thinking it was free. In recent years companies including Microsoft, Google, Dropbox, and Box have offered some amount of free online storage as a way to get people hooked on the service so that users of the free service will consider becoming paying customers.

But now Microsoft is cutting back: the company has announced some major changes to its OneDrive storage plans. Free users will only get 5GB of storage space instead of 15GB. And if you subscribe to Office 365, you’ll get 1TB of cloud storage instead of unlimited storage.

Update: Microsoft is now offering a way for existing subscribers to keep their storage… but they’ll have to opt-in. 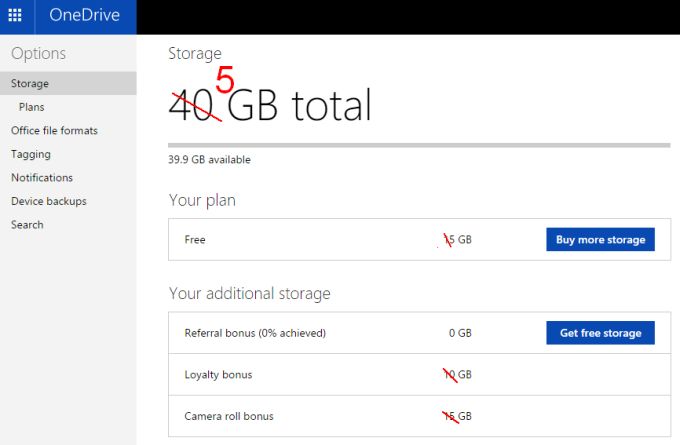 Up until now Microsoft had also offered an extra 15GB of free OneDrive storage for users that backed up the camera roll from their mobile device, effectively giving some users 30GB of free storage. That ends soon too.

The company is also eliminating its paid 100GB and 200GB plans an introducing a new 50GB plan that costs $1.99 per month.

Microsoft says the changes will go into effect in early 2016, but users that already exceed the limits will have a few options.

Why the change? Microsoft says some people were taking that “unlimited” thing a bit too seriously, storing more than 75 terabytes of data in the cloud by backing up video collections, multiple PCs, and other data.

The company says that a small number of people who were doing that were using 14,000 times the average amount of storage space… although if Microsoft didn’t want you actually using unlimited storage, maybe it shouldn’t have been labeled as unlimited storage.

That explanation also doesn’t really address the decision to reduce the amount of OneDrive storage for free customers by two thirds.

Google, meanwhile, continues to offer at least 15GB of free storage for users of Google Drive, Gmail, and Google Photos and Box offers 10GB of free storage (although individual files cannot be any larger than 250MB).