Microsoft is updating its line of Lumia smartphones running Windows Phone software. The Lumia 830 is the company’s new flagship phone with a 5 inch display, a Qualcomm Snapdragon 400 processor, and the price of a mid-range phone. It’s expected to sell for 339 Euros.

Meanwhile the Lumia 730/735 is a slightly smaller, cheaper phone with a 4.7 inch screen and a 219 Euro price tag. This model is also the phone some folks have been calling Microsoft’s “Selfie phone,” thanks to its 5MP wide-angel front-facing camera.

Note that while Microsoft acquired the rights to use both the Lumia and Nokia names when the company bought Nokia’s phone division, Microosft isn’t using the Nokia name much in marketing these new products… although the phones do still have the Nokia brand on them. 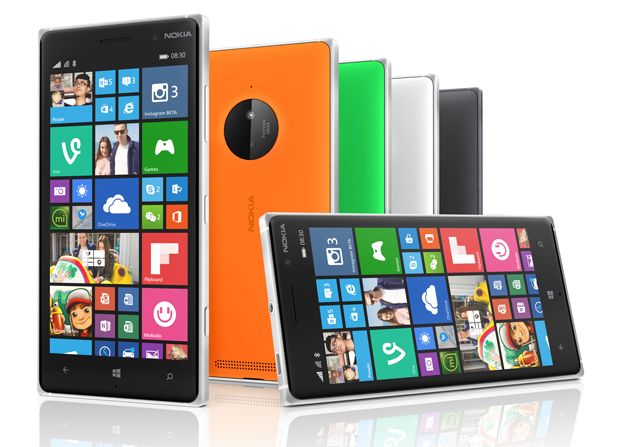 Microsoft’s making an interesting move with its latest flagship phone. Instead of trying to compete with top tier iPhone and Android phone models, the company is launching a more affordable device with a mid-range processor and a 1280 x 720 pixel display.

But that doesn’t mean the Lumia 830 doesn’t have some intriguing hardware.

The phone features a curved IPS LCD display with ClearBlack technology which the company says makes it easier to view in sunlight. It’s powered by a removable 2200mAh battery and features support for Qi wireless charging. And the phone has a 10MP PureView camera with optical image stabilization and ZEISS optics.

The front-facing camera on this phone is just a basic 1MP camera which can shoot 720p video.

Other features include 16GB of RAM, a microSD card slot for up to 128GB of removable storage, and the latest version of Windows Phone 8.1 with Luna Denim software improvements including a new camera app, enhanced Cortana voice assistant features, and more.

Microsoft is positioning these phone with high-quality front cameras as mid-range handsets for folks who snap a lot of selfies or use Skype or other video chat services. 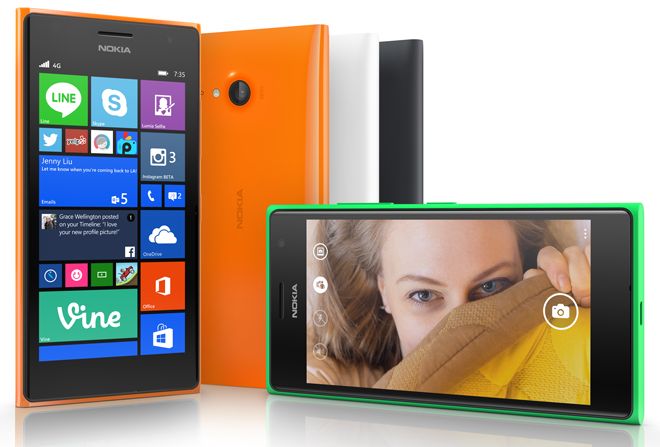 The Lumia 730 is a Dual SIM 3G smartphone while the Lumia 735 is a 4G LTE model that features a single SIM card slot.

This model has a 4.7 inch, 1280 x 720 pixel OLED display which Microsoft also says is sunlight viewable. It also supports touch input even when you’re wearing gloves.

Like the Lumia 830, this phone is powered by a 1.2 GHz Qualcomm Snapdragon 400 quad-core processor. That’s a mid-range chip which should offer decent performance for most tasks, but it’s not exactly one of Qualcomm’s fastest processors.

The Lumia 730/735 features 8GB of built-in storage, a microSD card slot for up to 128GB of removable storage, and has a 6.7MP rear camera with LED flash.

The phone has a 2220mAh battery and select models support wireless charging. If you have a model that doesn’t, you can buy a separate wireless charging shell to slap on the back of the phone (see below).

Microsoft says the Lumia 730 and 735 should begin shipping in September, with the 3G dual SIM model selling for 199 Euros (excluding VAT) and the 4G LTE model going for 219 Euros (not including VAT).

There’s a new Nokia charging plate that uses Qi wireless charging so that you can charge select Nokia phones by placing them on top of the plate. 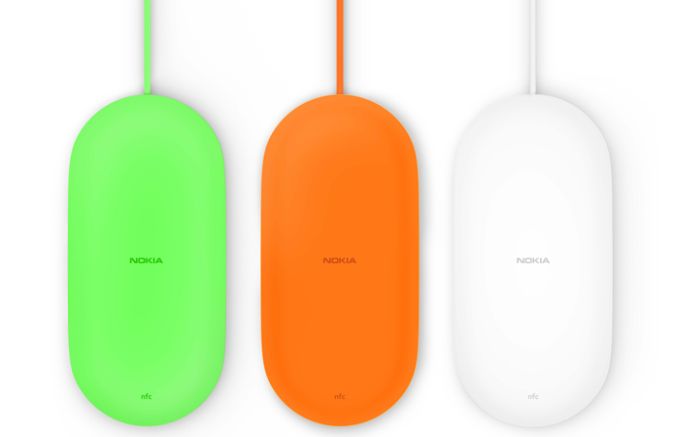 It also supports Bluetooth LE and has a notification light to let you know when you’ve missed a call, text message, or email on your phone.

The Nokia Smart Wireless Charger will be available in October for $59. 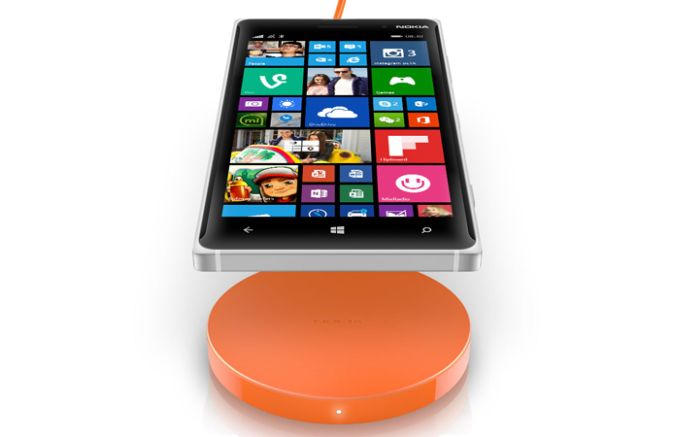 There’s also a new $39 Nokia Wireless Charging Plate launching in September. This model’s a smaller wireless charger that doesn’t have Bluetooth or any special notification features. 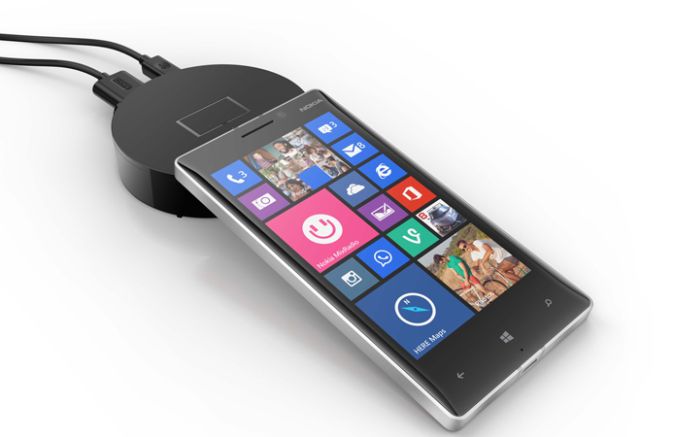 The device isn’t entirely wireless: you’ll need to plug it into your TV with an HDMI cable and connect a power source with a micro USB cable. But you don’t need to plug in your phone to use it. The Screen Sharing device connects to NFC-enabled Lumia phones wirelessly.

Just tap your phone to the Screen Sharing box and it’ll send video from your phone to your TV. The adapter works with Nokia phones that support Miracast wireless display technology and it should be available in September for $79. 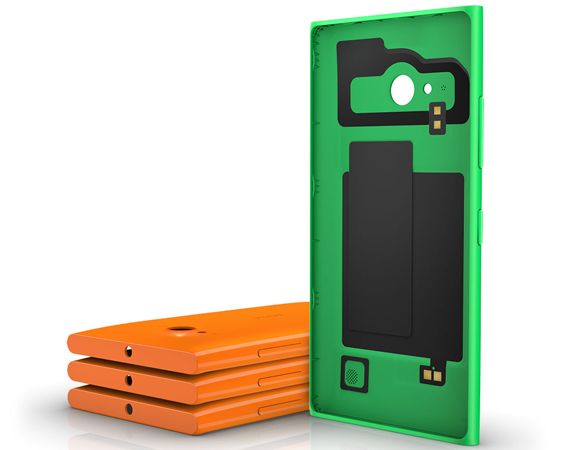 Microsoft is also introducing a Wireless Charging Shell for the Lumia 735 that lets you replace the back cover of the phone with a new panel with a Qi wireless charging coil built in.

And if you want a flip cover for the Lumia 830, you can get a Wireless Charging Flip Shell that replaces the back panel of that phone with a new one that features a built-in flip cover that protects the front of the device. 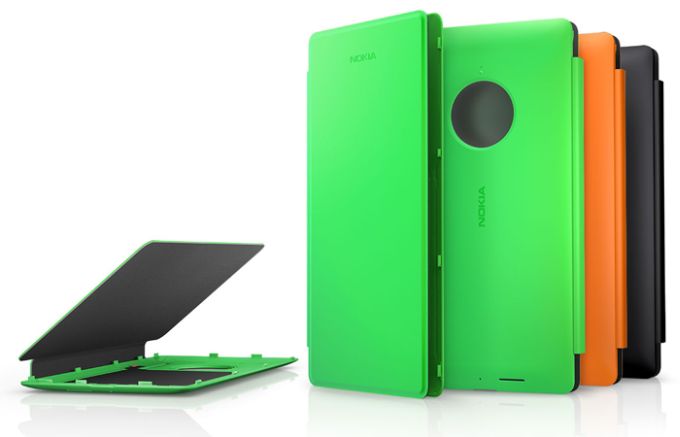