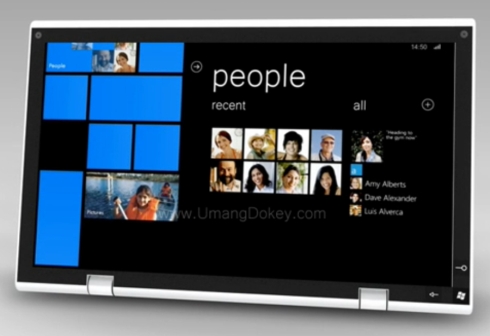 Mockups from enthusiastic designers aside, it looks like Microsoft has no plans to bring Windows Phone 7 to tablet-sized computers. At an event in Singapore, Microsoft CEO Steve Ballmer said that the company is focusing on “putting Windows phone 7 in phones,” which isn’t really all that surprising. Heck, the OS has “phone” in the name, right?

But a large part of the appeal of Apple’s iPad is that the tablet features a touch-friendly OS that was built from the ground up to be used without a keyboard and mouse. The same can’t be said of Windows 7, the operating system Microsoft is pushing for tablets. I’ve tested a number of relatively inexpensive convertible tablet-style netbooks running Windows XP or Windows 7 over the past few months, and I have to say, none of them really provide an excellent handheld computing experience. It just takes too much work to do simple things like scroll through web pages or enter text.

HP hasn’t ruled out releasing a Windows 7 tablet, but the company is also now focusing on building slate computers equipped with the Palm WebOS operating system which, like iPhone OS, was designed from the ground up for finger-friendly input. And dozens of PC makers have been demonstrating Google Android tablets.

Maybe it wouldn’t be such a bad idea for Microsoft to consider making its upcoming touch-friendly Windows Phone 7 OS available to tablet makers as well?