Windows 10 may ship with the shiny new Edge web browser, but it also includes Internet Explorer 11, which makes sense since there are some features that aren’t yet supported by Edge, like extensions.

Chrome, Firefox, and Safari have all eaten away at Internet Explorer’s market share in recent years. But there are still millions of people using the web browser that probably came with their computer. And Microsoft would really like those people to upgrade to the latest version. 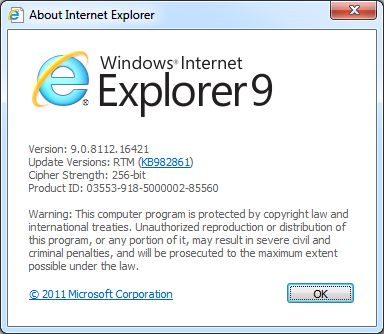 That mean the company won’t offer security features or offer technical support to users unless they’re running IE11. You can still use IE8 to surf the web at that point, but Microsoft really doesn’t recommend it.

Users who are receiving automatic updates from Windows Update, but who have not upgraded to IE11 will probably see a notification  encouraging them to upgrade.

As for Internet Explorer 11, Microsoft plans to continue supporting it through the life cycle of Windows 7, Windows 8.1, and Windows 10. So if you’ve been trying to get your friends, family, and coworkers to stop using Internet Explorer altogether, it’ll probably be at least 9 more years before Internet Explorer isn’t an option at all anymore, since extended support for Windows 10 runs through 2025.

Anyway, as TNW points out, Microsoft’s push to kill older versions of IE should come as good news to web developers, since they’ll no longer have to support outdated browsers…. unless they want to support Windows Vista or older operating systems which cannot run IE11.