Microsoft has announced a few new scheduling and task management features for voice and keyboard users… but the company has also revealed that it’s pulling the plug on a whole bunch of other features.

Goodbye music controls, smart home gadget controls, and support for all third-party skills (meaning any function that wasn’t developed by Microsoft itself). 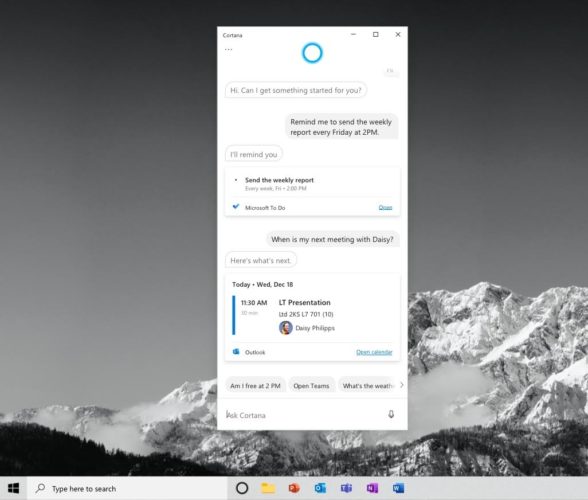 The move is just the latest in a series of efforts by Microsoft to re-position Cortana.

In 2018 the company made it possible to use Cortana to talk to Amazon’s more popular Alexa voice assistant. In early 2019, the company split Cortana from the Windows 10 search feature. And Microsoft recently pulled the plug on its standalone Cortana mobile apps for Android and iOS.

It feels like it could just be a matter of time before the company throws in the towel on Cortana altogether. Or maybe it’ll live on as a simple tool for interacting with Windows by voice or natural language text chat.

For now the company says you can use it as a productivity aid to do things like check your calendar, set reminders, or add items to your Microsoft To Do list with questions and comments like:

So I guess that’s new… or something. Really? You couldn’t do those things before? OK.

In other words, one way to avoid Cortana altogether is to use a version of Windows 10 that’s more than 18 months old (although you may also miss out on some key bug fixes and security updates if you do that).