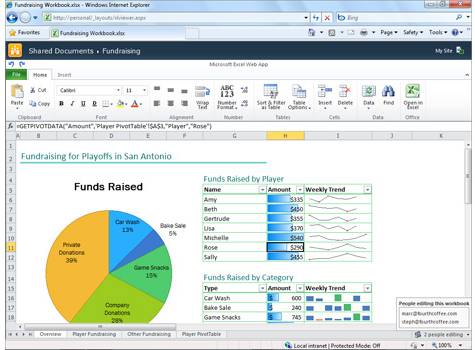 It’s been years in the making, but Microsoft has finally launched its answer to Google Apps with Office 365. You’ll notice I didn’t say Google Docs, because the new suite of services actually goes beyond a web-based document editor.

In fact, Microsoft has offered web-based versions of PowerPoint, Excel, and Word since last year. Office 365 combines those web apps with hosted email, calendar, and collaboration software and allows users to access and edit data on a desktop PC, phone, or any device with a web browser.

While the basic Office Web Apps are free, the full Office 365 service has a variety of plans starting at $6 per month per user. Microsoft is pitching the service to small and mid-sized businesses who need more than a simple way to edit documents, but who could also use Microsoft SharePoint Online, Exchange Online, and Lync Online services.

Google Apps is still a cheaper option, priced at $50 per year per user. But Microsoft has a huge head start since there are far more Microsoft Office users than Google Docs users, which makes the transition to Office 365 a lot easier. Google Docs has also always had a little difficulty recognizing some of the more complex formatting options in Microsoft Office documents, which makes using Office on the desktop and Google Docs in the cloud a bit tricky at times.