Microsoft has pretty much given up on its Windows Phone operating system. But the company can’t really afford to give up on the smartphone space. So the company has spent the last few years bringing apps such as Bing, Outlook, Office, and Cortana to Android and iOS.

Microsoft Edge is the web browser that made its debut with Windows 10. It’s faster and cleaner than the aging Internet Explorer browser that Microsoft is known for. But it has a limited market share (and limited support for third-party extensions).

Edge for Android and iOS is even more limited… for now. But Microsoft is rolling out a preview version that, at the very least, will be handy for folks that are already using Edge on a desktop or laptop computer. 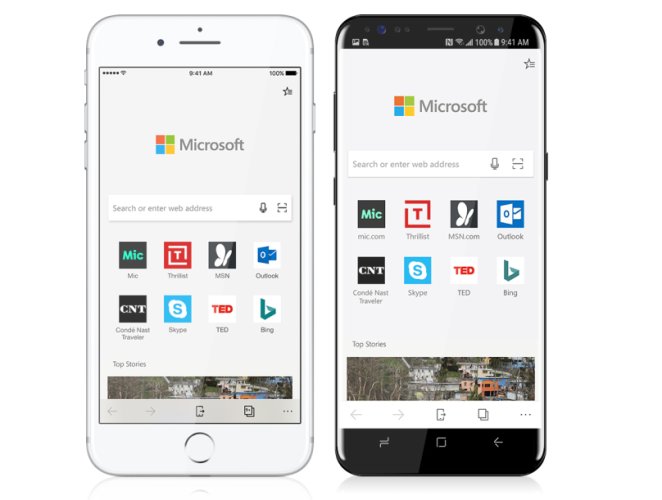 Edge for iOS is launching today as a preview version that you can use via Apple TestFlight. An Android beta is on the way, and you can sign up to be notified when it’s available.

The mobile version of Edge includes support for some of the same features available in the desktop version, including Reading List, Favorites, and Reading View. Passwords and bookmarks are synchronized between your phone and PC as long as you’re logged into your account.

But the best reason to use Edge on a non-Windows phone is probably the “continue on your PC” feature.

Find a page on your phone that you’d rather see on your PC? You can tap a button to send it to your desktop browser. This could come in handy if you want to save or print a page, or if you just got to work and want to keep reading that article you started on the train.

This is still just an early preview and Microsoft says there are some planned features that aren’t available yet, including support for languages other than US English, roaming passwords, and support for tablets.

If you’re wondering whether the Android and iOS versions of Microsoft’s browser use the same EdgeHTML rendering engine as the desktop version… they don’t.

Edge for Android uses the same Blink web rendering engine as Google Chrome, and the iOS version of the app uses WebKit. So don’t expect Edge to be much faster or to interact with web content differently than Chrome or Safari. But the user interface and special features are all Microsoft.