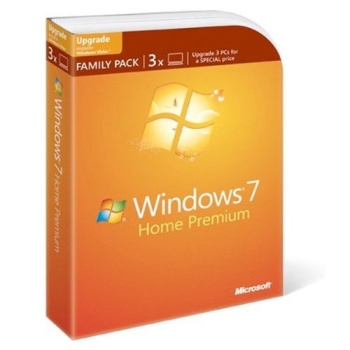 When Microsoft launched Windows 7 about a year ago, the company offers the usual versions. You could buy a single user Windows 7 upgrade disk that let you upgrade from an earlier version of Windows or a full install disc that let you install the operating system from scratch. For a limited time you could also buy a Windows 7 Family Pack, which gave you 3 Windows 7 Home Premium upgrade licenses, allowing you to install the OS on 3 separate Windows computers.

The Family Pack was by far the best bargain, priced at just $149.99, but it was a limited promotion which went away after a while… and now it’s coming back.

Microsoft will begin offering the Windows 7 Family Pack again starting on October 3rd. This will be a limited time deal again, so once it’s sold out, it’s sold out (unless Microsoft revives the promotion again next year).

Keep in mind, these are upgrade licenses, so you’ll need a computer running Windows Vista or Windows XP in order to install Windows 7 using the Family Pack.

Oh yeah, last time the Family Pack was only available in the US. This time it will be available in Canada, the UK, Australia, France, and Germany as well. Those countries will be able to place orders starting on October 22nd.

5 replies on “Microsoft brings back the Windows 7 Family Pack: 3 licenses for $150”