Want a small computer that you can use in the office or the living room, but don’t want a model with a boring plastic or metal case? How about one made from LEGO bricks? Not good enough? How about if you make it stackable… just like a LEGO brick?

While people have been building PC cases from LEGO for ages, Mike Schropp has gone above and beyond with his line of custom built systems. Earlier this year he launched the Mini Lego computer which sells for $999 and up.

Now he’s offering the smaller, more affordable Micro Lego computer for $599 and up. 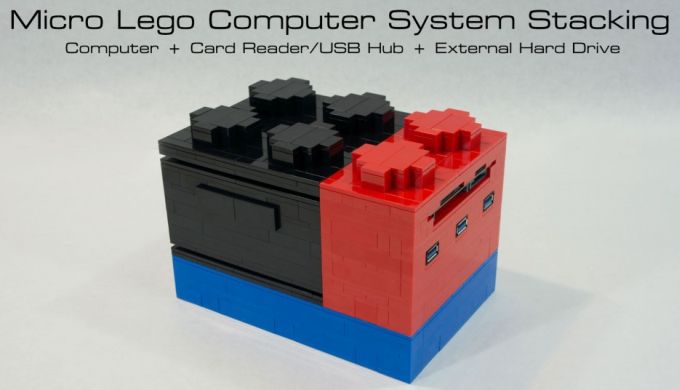 The little computer measures about 5″ x 5″ x 4″ and features the guts of an Intel NUC mini-computer. But the outside is made of LEGO bricks and the finished product looks like one big 2×2 LEGO brick.

It’s even stackable, like a normal LEGO piece. Not only does that add to the geek factor, but it also makes it possible to attach an add-on case with additional hardware if you want to add more ports, card readers, external drives, or other components.

An entry-level Micro Lego Computer sports an Intel Core i3 Broadwell processor, 4GB of RAM, 128GB of solid state storage, 802.11ac WiFi, Bluetooth 4.0, and a $599 price tag. There are also options for models with Core i5 and Core 7 processors, additional storage, and up to 16GB of RAM.

Note that while Schropp’s computer is based on a fanless Intel NUC system, he added a low-noise fan in order to keep the system from overheating in its plastic case. There are also holes in the case that allow air to flow across the system.

You can read more about the design process for the Micro Lego Computer at Total Geekdom.

8 replies on “Micro Lego Computer: Tiny PC with a case made from LEGO blocks”