There’s no shortage of tiny PC-like devices with ARM-based processors these days. But most feature the specs of a cheap tablet, at best. The Mi World Portable Computing System is a computer small enough to fit in your hand which has the guts of a high-end smartphone.

It’s designed to act as a portable computer, hot spot, media server, or gaming device and can work with your existing computers, tablets or other devices… or it can replace some of them.

Unfortunately not only does it have the power of a premium phone — it also has a price tag to match. The makers of the Mi World PCS are running an Indiegogo campaign to crowdfund the project, and you’ll have to pledge $599 to get your hands on one. 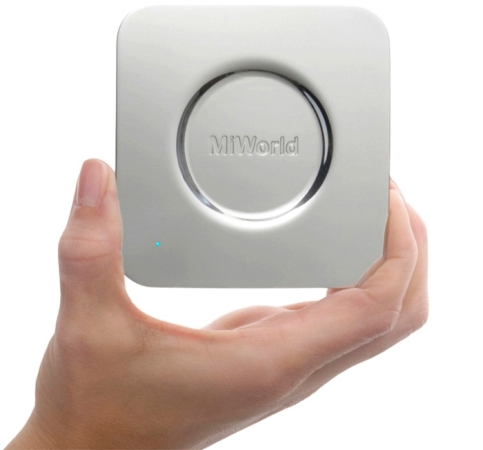 The $599 model features 64GB of solid state storage, but there are also higher-priced models with up to 512GB of hot swappable RAID storage.

Myth Innovations is the company responsible for the Mi World PCS, and the company says the device runs a custom version of Android. A custom Linux-based operating system is also due out this summer.

While Myth Innovations describes the Mi World as a portable computer, it doesn’t have a display so it’s not exactly a laptop or tablet replacement. But you could plug in an external display to access content on a big screen. Or you can load it up with apps, games, music, movies and photos and access your data using a laptop, tablet. Google Glass or other device over a WiFi or Bluetooth connection.

The company even plans to enable support for running Windows or OS X on the Mi World PCS using virtualization, allowing you to use the system like a full-fledged desktop PC with a desktop operating system.

The Mi World PCS may not be the cheapest ARM-based mini PC project, but it looks like one of the most ambitious.