Smartwatches have been a thing for nearly a decade at this point, letting users view notifications, control media playback, and occasionally even make phone calls Dick Tracy-style from their wrist. But one thing that hasn’t really taken off, despite the occasional attempt from one watch maker or another? Smartwatches with cameras.

Now it looks like Meta (the company known as Facebook until yesterday) may want to give camera-equipped smartwatches another try. 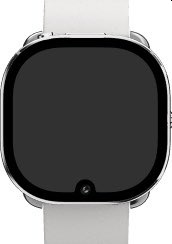 According to a report from Bloomberg, a picture of an unannounced watch with a front-facing camera was found in the company’s iPhone app designed to work with the recently launched Ray-Ban Stories smart glasses.

The picture shows a watch with a squarish screen featuring rounded edges, a control button on the right side, and a camera embedded in the center bottom portion of the screen.

While there are no details about what the camera would be used for, it seems like Facebook Messenger and other communication apps including Meta-owned WhatsApp would be a safe bet. The company’s existing Portal line of smart displays are basically just Amazon Alexa-enabled devices that also work with Facebook Messenger. It’s easy to imagine that this watch would bring the same feature to your wrist.

Whether video calls on a wristwatch is a thing people actually want remains to be seen.

Bloomberg reports that Meta (Facebook) had been considering launching a watch as early as 2022, but no decision has been finalized yet. It’s also possible that the version shown in the leaked image may never see the light of day, but Bloomberg’s Mark Gurman seems pretty certain that the company will release some version of a smartwatch at some point.

via Bloomberg and Steve Moser