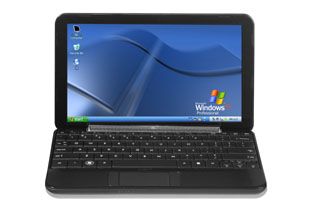 The folks at Netbook News.de spotted an unusual 10 inch netbook at IFA in Berlin. While the MenQ Easy PC E102 looks a bit like an HP Mini 1000 at first glance, thanks to its keyboard and touchpad, the MenQ netbook is outfitted with an x86-compatible processor based on the RISC architecture. It’s available in 1.2GHz or 1.6GHz versions and the processor can support Windows XP, but not necessarily all the applications you’d expect to run on Windows XP. Netbook News does point out that the laptop does support Flash video.

And honestly, no, I don’t have any idea what, if any advantages there are to using a RISC-based processor instead of an x86 chip from Intel, VIA, or AMD. But it’s still nice to see a it of diversity out there. And it looks like the EasyPC E102 will be cheap. The company expects to sell the laptop to dealers for about $160 a unit when you order a thousand or more, which means it could potentially hit the streets for between $200 and $300.