After unveiling a new PC-on-a-stick with an Intel Apollo Lake processor and a fanless design at CES in January, Chinese device maker Mele is now selling the new PCG02 Apo.

You can pick up a model with a Celeron N3450 quad-core processor, 4GB of RAM, and 32GB of storage from Mele’s AliExpress store for $200. 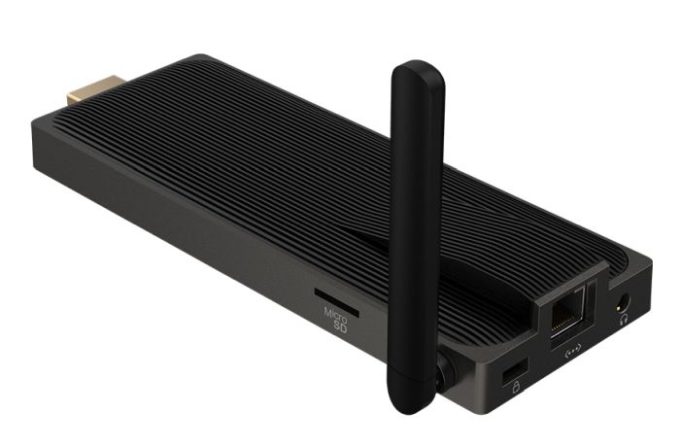 The last I’d heard, Mele was also planning to launch versions with Celeron N3350 dual-core and Pentium N4200 quad-core processors, so we may see a range of models at different price (and performance) points.

CNX-Software also indicates that Mele may drop the price for the Celeron N3450 model to $180 soon.

Anyway, what’s interesting about this device is that it’s basically a full-fledged Windows 10 computer that you can plug directly into the HDMI port of a TV or monitor. It has supports HDMI 1.4b for up to 4K/30fps video and has a 3.5mm audio jack, Gigabit Ethernet, 802.11ac WiFi, Bluetooth 4.2, and two USB 3.0 ports. There’s also a micro USB port for power.

The whole thing measures about 5.9″ x 2.1″ x 0.65″ and weighs about 5 ounces, which makes it one of the biggest PC sticks I’ve seen. But the chunky design allows for a full-sized Ethernet jack, a 6 watt processor, and passive cooling for silent operation.

If you’re waiting for fanless mini PCs with Intel Gemini Lake processors (the follow-up to Apollo Lake), those are on the way too.

Mele showed off a few different models at the Consumer Electronics Show in January, but they’re all more traditional mini PC boxes rather than PC-on-a-stick devices.