Chinese computer maker Mele has been offering small Android and Windows computers for a few years. Now the company is selling a PC-on-a-stick that runs Ubuntu Linux.

The Mele PCG02U is a fanless PC stick with an Intel Atom Bay Trail processor and Ubuntu 14.04 software. It’s available from AliExpress for $70. 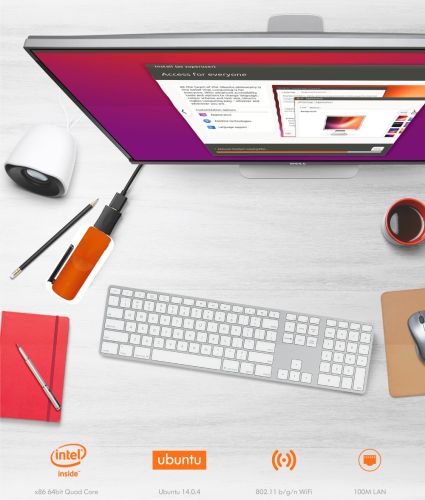 The tiny computer measures about 4.5″ x 1.9″ x 0.65″ and has the same basic specs as the first-generation Intel Compute Stick:

But the stick does have a few distinguishing features. There’s an adjustable antenna on the side, and a 10/100 Ethernet jack on the end, allowing you to connect to wired networks.

Priced at $70, the PCG02U is also a lot cheaper than the original Intel Compute Stick… even if both the hardware and software are starting to look dated, now that Compute Sticks with Intel Cherry Trail and Core M Skylake processors are available and now that Ubuntu 16.04 has been released.

If you want to install the newer version of Ubuntu yourself though, I suspect Ian Morrison’s recent build for Compute Sticks would work well on this little computer.