The Fujitsu Stylistic Q572 is a 10 inch tablet designed to run Windows 8. But that hardly makes it stand out in a crowd. What does is the processor.

Fujitsu’s new 10 inch tablet is one of the first computers set to ship with an AMD Z-60 Hondo processor. That’s AMD’s new low-power chip with a TDP of 4.5W and Radeon HD 6250 graphics for HD video and 3D graphics acceleration. 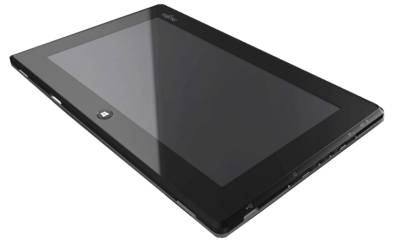 I haven’t had a chance to test a Hondo-based system yet though, so it’s difficult to say which chipset offers better all-around performance.

But the Fujitsu Stylistic Q572 looks like an interesting tablet. It’s aimed at business customers and Fujitsu offers a wide range of options.

The tablet will be available with a choice of Windows 8 or Windows 8 Pro, up to 4GB of RAM, and a 64GB to 256GB solid state disk. It features a 1366 x 768 pixel IPS dual-digitizer display. That means you can use your fingers or a digital pen to interact with the user interface.

Fujitsu says the tablet gets about 7 hours of battery life.