HTC has taken a streamlined approach to smartphones in recent years, focusing on releasing just a few models including one flagship device. This year’s flagship is the all new HTC One.

It has the same name as last year’s model and it actually looks a lot like the older HTC One as well. But the new phone is faster, has better speakers, supports a microSD card for removable storage, and has an unusual new camera with dual lenses, allowing you to adjust the focus on pictures even after you’ve snapped a photo. 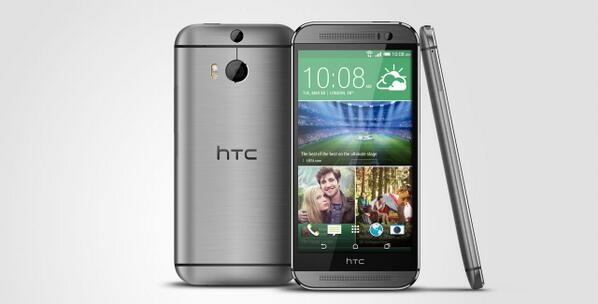 The HTC One (M8) will be widely available in stores from most US and Canadian wireless carriers by April 10th, 2014. Verizon will have the phones available in-stores starting at 1:00PM today.

Unlike the last few HTC phones, the HTC One (M8) also has a microSD card slot. While it doesn’t have a removable battery, HTC says the new phone should get about 40 percent longer battery life than its predecessor under normal usage. There are also battery saver modes that shut down some features to provide longer battery life when you need it. 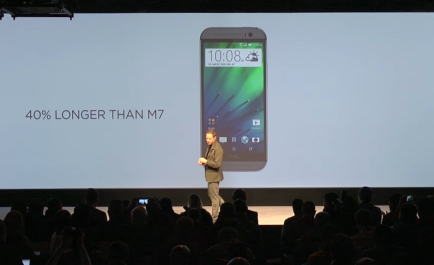 It runs Android 4.4.2 with the HTC Sense 6.0, which is  the latest version of HTC’s custom user interface and suite of apps for its smartphones. 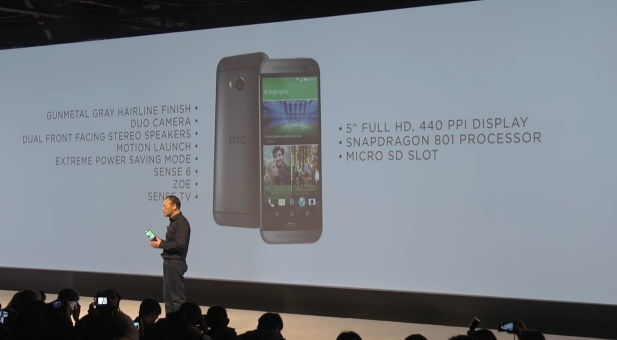 The new HTC Duo Camera is one of the hallmark features that sets this phone apart. Just like you use your two eyes for depth perception, you can use the two lenses on the camera to choose which parts of a photo to focus on. HTC calls the feature UFocus, and you can access it from the edit menu within the HTC photo gallery app.

HTC’s camera uses the same Ultrapixel technology as last year’s HTC One (M7) smartphone, which means it only has a 4MP image sensor, but it’s designed to take high quality photos in low-light conditions. The phone has a 5MP front-facing camera as well.

The phone has an IR port and you can use it as a universal remote control with HTC’s Sense TV app, which also includes updates from social media, sports scores, and other details.

HTC is also introducing support for  “Motion Launch” and other features that let you use the phone with fewer (or no) taps or swipes. When the phone rings you can pick it up and place it by your ear to answer a call without unlocking the phone first, for instance. You can also double-tap on the screen to wake up the phone and see the time or weather.

You can also use simple gestures to jump straight to the camera, BlinkFeed, or other features. 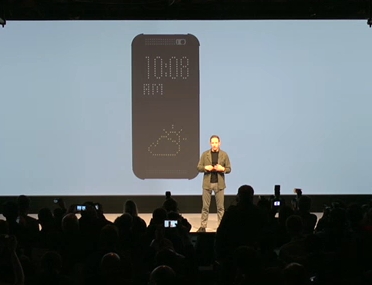 The new HTC dot face cover lets even lets you tap the cover without lifting it to see time, weather and other data without unlocking your device. You can even answer the phone while the screen is covered.

The company has also partnered with activity tracker Fitbit. The Fitbit app comes pre-loaded on the phone, and you don’t need to buy a separate fitness tracker to wear on your wrist or clip to your belt to use it — the app can use on-board sensors from the phone to track your activity. Of course you get more features if you buy a dedicated Fitbit device like a wireless scale.

Don’t want HTC Sense and all the other software bells and whistles? An HTC Google Play Edition with close-to-stock Android software costs $699 and features a few HTC goodies such as support for the Duo Camera.

HTC also has a $650 Developer Edition version of the phone.

3 replies on “Meet the all new HTC One (M8) smartphone”