The Raspberry Pi Foundation shipped its first $35 single board computer over 2 years ago. Now the team has updated the hardware with a new model sporting new features and the same low price.

Meet the Raspberry Pi Model B+. 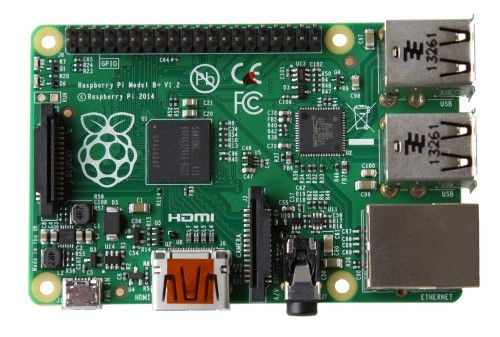 You can buy the Model B+ from Element14 or RS Components.

The new model has the same Broadcom BCM2835 processor and 512MB of RAM as its predecessor. It’s still small enough to hold in one hand, cheap enough to use for a variety of education or hobby-related activities, and powerful enough to use as a cheap desktop computer, a media center, a controller for a robot or home automation system, or much more.

But here are some of the things that make the Model B+ different from the original Model B:

The AV adapter is now more compact and it’s lined up next to the HDMI port.

The layout has also been tweaked a bit. The Raspberry Pi team says the new form factor is neater, with the USB ports aligned with the board edge, among other things. But the new design means that any case built for the original Model B won’t work with the new Model B+.

Since 26 of the 40 GPIO pins are in the same place as they were on the Model B though, any projects you’ve developed for the older model will continue to work with the new model.

While the Model B+ sells for the same $35 price as the Model B, it’s not going to replace it… at least not right away. The older version will remain in production as long as there’s demand for it, so if you have applications or peripherals designed specifically for that model you can continue to buy it.

Features that remain unchanged from the original include the 10/100 Ethernet port, HDMI port, CSI camera port and DSI display port, and micro USB port which is used for the power supply.

According to the Raspberry Pi Foundation, the Model B+ represents the “final evolution of the original Raspberry Pi,” which suggests that the next product we see from the group could be a model with new hardware (such as a faster CPU or more RAM) that some users have been asking about for years.

While the Model A, Model B and Model B+ feature relatively slow 700 MHz ARM11 processors with a reasonably decent graphics core, the hardware is only part of what’s made these devices popular over the past few years. More than 3 million units have been shipped and the ever-growing community of folks tinkering with Raspberry Pi machines means there’s a lot of community-based software and support for the platform, something that’s not necessarily as true of many competing devices that already have more powerful hardware.

So it makes sense for the Raspberry Pi Foundation to take things slowly instead of launching new and incompatible hardware every six months.