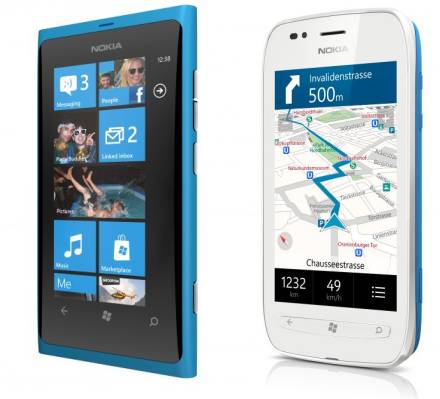 Nokia has introduced its first two smartphones to run Microsoft’s Windows Phone 7 operating system. The Nokia Lumia 800 is a high-end phone that will sell for about $585 without a contract in Europe, while the Nokia 710 is a less expensive model that’s expected to sell for around $375.

While Nokia still sells more phones than pretty much any other company in the world, the company has been losing ground in the smartphone space over the past few years as the iPhone and dozens of popular Android smartphones have flooded the market. Earlier this year Nokia announced that it would abandon its aging Symbian smartphone operating system and team up with Microsoft to launch new handsets running Windows Phone 7 instead.

If the Nokia Lumia 800 looks familiar though, that’s because it looks an awful lot like the Nokia N9 phone the company launched in Europe this summer. The biggest difference is that the N9 is the first (and last) Nokia phone to run MeeGo Linux. The design of the two phones is quite similar though — but the new Lumia 800 has a faster processor.

The Nokia Lumia 710 has a slightly more subdued design, but like its pricier sibling, the phone comes in a variety of bright colors — or rather, it has a series of bright, exchangeable back covers. The handset also has a 1.4 GHz Qualcomm MSM 8255 chip, a 3.7 inch, 800 x 480 pixel display, EDGE and 3G capabilities. But the screen is a TFT LCD display instead of AMOLED.

The cheaper handset has a 5MP camera and 8GB of storage. This model has a 1300mAh battery.

Both phones have 512MB of RAM, and both will ship with Windows Phone 7.5 Mango software.

Nokia will ship both phones in Europe on November 16th. They’re expected to launch in the US early next year.