The Moto X isn’t the only Motorola phone getting a makeover. The company is also refreshing its affordable Moto G Android phone with a new 2nd generation model.

It has a bigger screen, a better camera, and improved speaker placement… but some features remain unchanged from last year’s model. That might not be a bad thing though, because one feature that’s unchanged is the price.

The new Moto G goes on sale at noon Eastern time today for $180 and up. 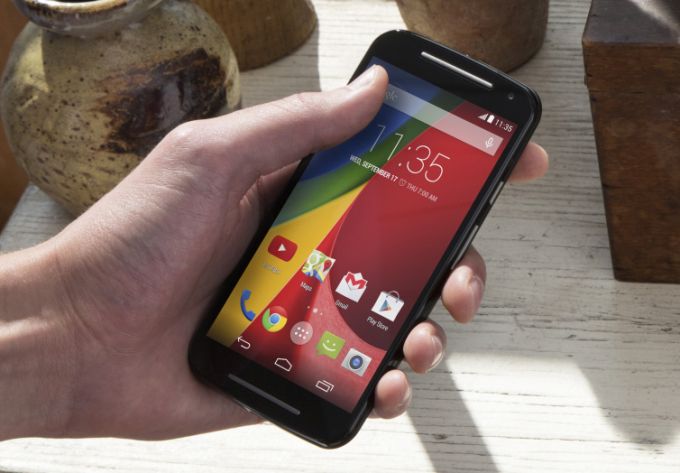 On the bright side bigger is bigger… and some folks seem to prefer phones with larger displays. Motorola has also replaced the single speaker on the original Moto G with stereo speakers on the new model… and they’re both on the front of the device which should make music and other audio sound better.

Motorola has replaced last year’s 5MP rear camera with a new 8MP camera and upgraded the front-facing camera from 1.3MP to 2MP.

Other new features include 802.11ac WiFi and a microSD card slot for removeable storage.

The phone has a 2070 mAh battery which Motorola says should offer all-day battery life and features Bluetooth 4.0. It ships with Android 4.4 KitKat at launch, and Motorola is guaranteeing an upgrade to the next version of Android.

While you can’t customize the full design of the Moto G with Moto Maker the way you can with the Moto X, Motorola does offer a range of “shells” including colorful rear panels for the phone or even shells with built-in flip covers.

One feature the 2nd-gen Moto G lacks (for now) is support for 4G LTE networks. This is a 3G-only phone. If you’re looking for a model with support for faster 4G networks you may want to wait a while… the original Moto G also launched as a 3G device, but earlier this year Motorola launched a new Moto G 4G LTE for $219.

Hopefully the new Moto G will also get the LTE treatment in the future.