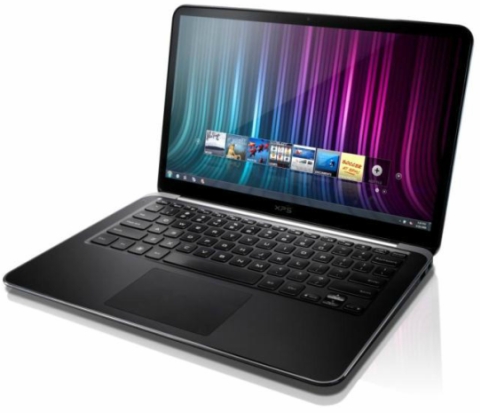 Dell’s first ultrabook will be available in late February for $999 and up. It’s called the XPS 13 and it’s a thin and light notebook with a 13 inch display. We’re seeing a lot of laptops that fit that description at CES this year. But Dell’s ultrabook has a few features that help it stand out from the crowd.

First, Dell says its ultrabook may have a 13 inch display, but the notebook chassis is the size you would expect to find from a typical 11.6 inch notebook. That’s because the screen has a thinner, borderless design allowing for a smaller screen bezel. The edge-to-edge glass panel is also Corning’s sturdy Gorilla Glass.

The Dell XPS 13 is the smallest laptop in the company’s line of premium XPS laptops — and now that Dell has discontinued its Mini line of netbooks, it’s one of the smallest and lightest Dell notebooks available.

Unlike the Dell Mini line though, there’s no mistaking the XPS 13 for a budget product. For $999 you can get a model with an Intel Core i3 processor, 4GB of DDR3 memory and a 128GB solid state disk. But models with Core i5 and Core i7 processors and 256GB SSDs will also be available for higher prices.

All models will have Intel HD 3000 graphics, Intel’s Rapid Start technology for quick booting and resuming from sleep, and Smart Connect technology which allows your notebook to grab the latest email, social network, and other updates even when the computer is in “sleep” mode.

Dell’s ultrabook will also have a backlit keyboard, a glass touchpad, a carbon fiber finish, 802.11n WiFi, and Bluetooth 3.0. It has a USB 3.0 port, USB 2.0 port, and mini DisplayPort. The laptop has a 47Whr battery for up to 8 hours of run time.