Apple’s first smartwatch is called… Apple Watch. It’s a wearable device which you can pair with an iPhone to run apps on your wrist. It also functions as a fitness tracker, and of course… a watch.

But this isn’t just a tiny iPhone that hangs out on your wrist. Instead the Apple Watch has an entirely new user interface designed for small screens and a new tool for interacting with them: a dial on the side of the watch called a Digital Crown that you can tap or turn to navigate. 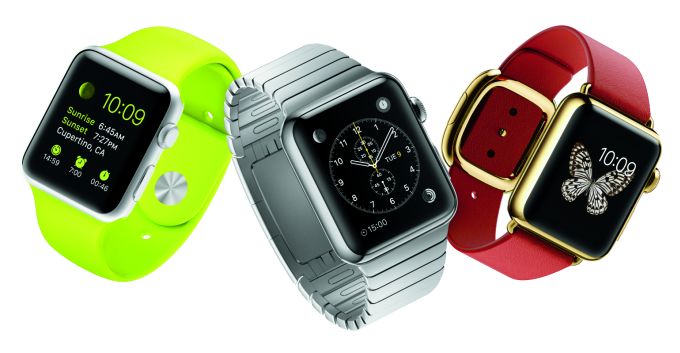 Pressing the Digital Crown brings you to the home screen, while moving the dial lets you do things like navigate through a list of apps or zoom in and out of maps.

There’s also a button below the crown that you can tap to bring up your contacts to communicate with your friends… in new ways, such as drawing on the screen.

The Apple Watch also has a pressure-sensitive touchscreen that can detect not only taps, but also the amount of force you’re putting on the screen.

Like Google’s Android Wear platform, Apple Watch also supports voice features. Press and hold the Digital Crown and it brings up Siri, which you can use to ask questions and receive answers on your wrist. 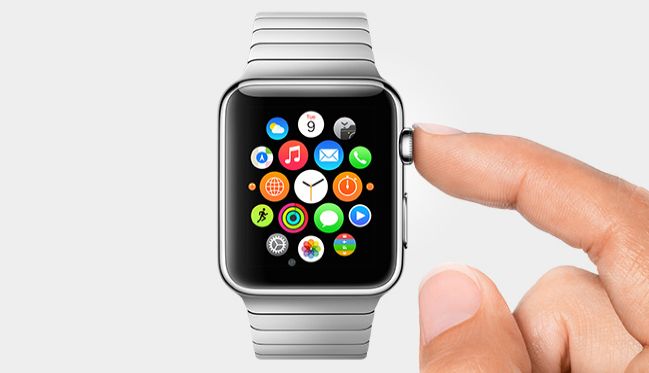 You can swipe up from the bottom of the screen to access “Glances,” which you can scroll between by swiping left or right. These provide quick access to information such as upcoming appointments, map locations, and music playback controls that let you play, pause, or skip tracks on your other Apple devices. 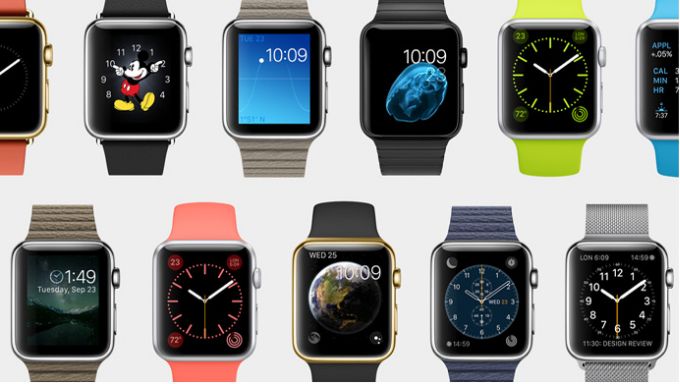 The watch has sensors that can track your heart rate, distance, and other movement and health stats and the watch is powered by a custom processor called the S1.

Apple says its watch is highly customizable and it will be available with a variety of wrist straps and digital watch faces. There will be 6 different interchangeable straps including leather. polymer, and metal straps.

The Apple Watch actually comes in multiple sizes — there’s a smaller 1.5 inch version that works with smaller straps for folks who find the basic 1.65 inch Apple Watch too big.

The watch itself also comes in 3 versions. Apple Watch Sport has an aluminum case, Apple Watch Edition has an 18k gold case, and the basic Apple Watch has a stainless steel case.

Each model uses a wireless MagSafe style charger so there are no ports on the watch. 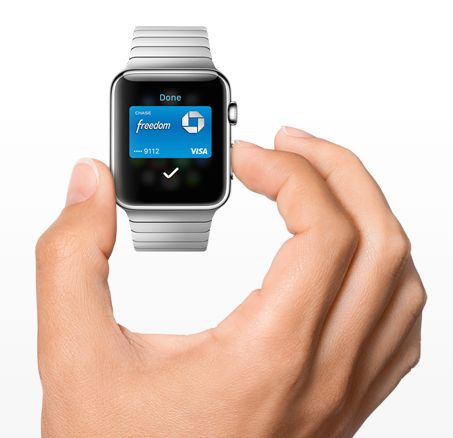 Apple Watch also includes NFC and it will work with Apple Pay, just like the new iPhone 6 and 6 Plus. This lets you use the watch like a digital wallet to pay for goods at over 200,000 stores that support touchless payment.

In fact, while older iPhones don’t support Apple Pay because they don’t feature NFC hardware, you can pair an Apple Watch with an iPhone 5 or later and use the watch to make mobile payments.

Apple is launching WatchKit, a platform that lets developers create apps that can show up on the Apple Watch home screen.

Initial apps including running software from Nike, social apps from companies like Twitter, a Honeywell app that lets you adjust your home thermostat, and a Starwood Hotels app that lets you unlock your hotel room door when you wave your hand by it.

Apple is also playing up the watch’s fitness-tracking capabilities with new Fitness and Activities apps that come pre-loaded. 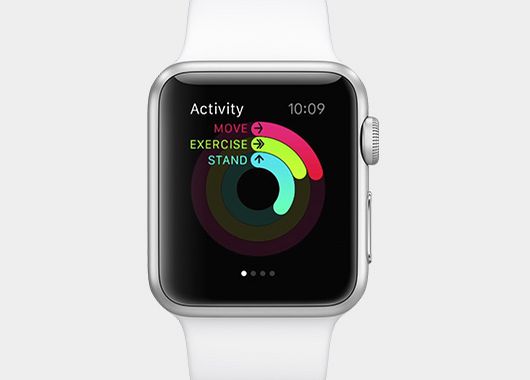 Personally I prefer a fitness tracker I can attach to my belt, because wrist-worn trackers don’t count steps I take while working at my treadmill desk because my legs are moving while my hands stay in place at a keyboard. But I’m a weirdo with a treadmill desk. I suspect most folks would rather have a watch-and-fitness tracker in one device instead of separate devices for each.

Tim Cook says he also uses his Apple Watch to control video playback on his Apple TV, other Apple employees use theirs as remote viewfinders for iPhone cameras or as walkie talkies.

The Apple Watch requires an iPhone to work, and it’ll support iPhone 5 or later.

Apple says it’ll be available early next year for $349 and up.