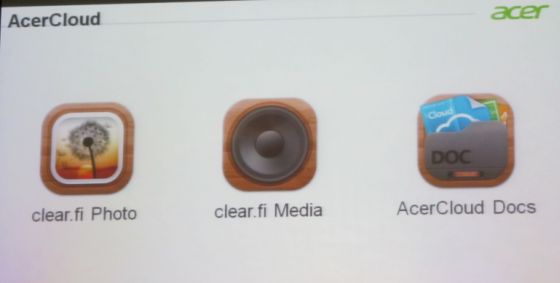 Acer is launching a new cloud-based service for synchronizing photos, media, and documents across multiple devices. You can also access your files from a web browser. If the whole thing sounds an awful lot like Apple’s iCloud, that’s because it is an awful lot like iCloud. The difference is that AcerCloud works with Windows and Android rather than iOS.

The company says you don’t need an Acer PC or phone to use the new service, but the software will come preloaded on Acer computers later this year. Existing Acer customers will also be able to download the update later this year. But if you have an Acer PC and a Samsung smartphone you’ll still be able to synchronize your data.

There are three parts of AcerCloud. Clear.fi Photo, clear.fi Media, and AcerCloud Doc.

The Photo experience takes a page out of the Apple (and Google Plus) playbook by giving users a photo stream (although Acer calls it PicStream). Photos you shoot can automatically be uploaded to the cloud and visible almost instantly. This provides a quick and easy way to backup or share your photos, or just synchronize them across devices.

AcerCloud Docs lets you view Word, Excel, or PowerPoint documents across multiple devices or online. Documents will be stored in the cloud for up to 30 days, although you can always download them to keep them longer.

The clear.fi Media feature to stream music from the cloud to a PC or an Android device, or download songs for offline playback.

AcerCloud will be available in North America and China starting in the second quarter of 2012. It will go global in the fourth quarter of the year.