The MEEP tablet is an inexpensive Android tablet aimed at kids. It has a tough plastic case, a custom user interface, and an app store for downloading games and apps aimed at the younger set.

Oregon Scientific is offering the tablet for just $150, which would have been a pretty great price if the company was ready to sell the MEEP tablet when it was first announced in February. But these days you can pick up B&N NOOK, Amazon Kindle, and Google/Asus Nexus tablets for under $200, and you get a lot more bang for the buck with each of those devices. 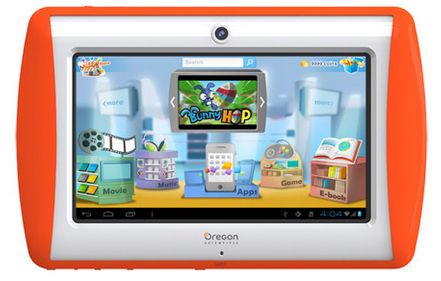 There is an SD card slot for extra storage, and there is an HDMI port which lets you stream video to an external display at resolutions up to 2160p. The tablet is also one of the few I’ve seen with separate audio jacks for a mic and headphone. In fact, Oregon Scientific will sell accessories including a mic, headphones, and even a keyboard, drum pads, and game controllers.

But the low resolution screen on the tablet is pretty disappointing.

I suppose if you kids have bad eyesight and don’t mind not having access to the full Google Play Store, you could find worse ways to spend $150.