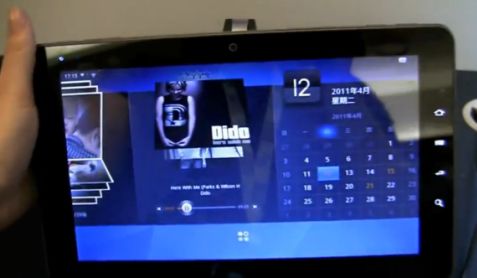 We already knew that the folks behind the MeeGo Linux operating system were developing a tablet-friendly user interface. But if you were wondering what it actually looked like on one of those newfangled tablets with an Oak Trail chip you’ve been hearing so much about, Netbook News has you covered. They’re on site at the Intel Developer Forum in Beijing this week, where they spotted an Oak Trail tablet running MeeGo.

The tablet has a 1.5 GHz Intel Atom Z670 low power processor, a solid state disk, and 1GB of RAM, and seems to be pretty typical of what we can expect from Oak Trail tablets.

But what’s most interesting about the tablet is the operating system, which has been redesigned for touch input. There are home screen widgets including a music player, calendar, and photo viewer with 3D navigation controls.

The program launcher has an iPhone-esque look with a series of large icons for each app. The key difference is that you can organize the icons by category.

We’ve seen tablet designs for MeeGo in the past, but the latest version seems to have come a long way, and looks like it could rival iOS or Android in terms of usability — assuming third party developers write touch-friendly applications for the platform.