The MeegoPad T01 is a little computer-on-a-stick that looks like an Amazon Fire TV Stick or Chromecast. But it’s not just designed to let you stream music and movies to your TV: it’s a full-fledged (albeit tiny) computer that runs Windows 8.1.

Actually, the MeegoPad T01 comes with both Windows and Android pre-loaded. You can switch between the operating systems.

We first heard about this little computer in October when it launched in China, and now it’s available for purchase in the United States for as little as $100. 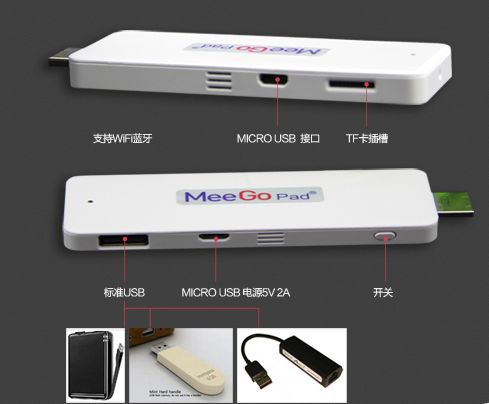 Update: You can also order one from Amazon… or if you want a similar device with a better-known brand name, the Intel Compute Stick is set to launch in 2015 for $89 and up.

Update 2: Note that at least some versions of this stick ship with an unlicensed version of Windows 8.1, which means you’ll need to either supply your own operating system or pay for a Windows license.

There’s an HDMI port on one end, which lets you plug the stick directly into a TV or monitor, and a USB 2.0 port on the other end which you can use to connect storage, a keyboard, mouse, or other accessories. There’s also a micro USB port, but that’s used to provide power.

The MeegoPad T01 isn’t the most powerful Windows computer money can buy. But it’s certainly one of the smallest — and based on my experience with Windows and Android devices with Bay Trail processors, it should be capable of handling HD video playback and basic computing tasks such as web browsing and document editing.

If you want a device with a few more ports and an Ethernet jack you might want to look at the Zotac ZBOX PI320 pico… but that little computer costs about twice as much as a MeegoPad T01.