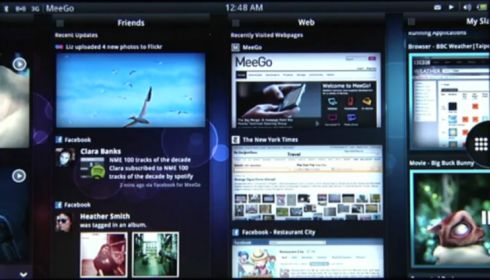 Sure, MeeGo is set to launch a pre-alpha version of its Linux-based software for smartphones next week, but we won’t actually see devices running that version of MeeGo until October or later. But you know what might be ready to go a little sooner than that? MeeGo for tablets.

Some tablets, like the iPad take a basic smartphone UI and scale it up to a larger screen. Others, including Windows 7 tablets take a desktop operating system and slap on some touch-friendly navigation gestures. But MeeGo’s tablet UI was designed from scratch as a different way to interact with your data, using a system of icons, hubs, multitouch gestures, and notifications. In fact, it almost looks more like Windows Phone 7 than anything else I’ve seen.