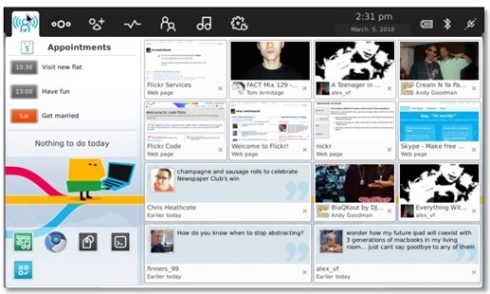 The folks behind the MeeGo Linux project launched the first public beta version of the operating system recently. But that’s just the first step. MeeGo is backed by Intel and Nokia, and they have big plans to get the paltform on all sorts of devices including netbooks and smartphones soon.

The netbook version of MeeGo doesn’t look like anything all that new if you’ve been following Moblin Linux for a while. MeeGo was born out of the merger of the Moblin and Maemo projects. And it looks like the UI is mostly Moblin-based, with a heavy dose of home screen widgets for checking your email, seeing status updates from your contacts, and launching apps. There are tabs along the top of the user interface for launching different zones, including a people zone (for your contacts) or a media zone for playing music and movies.

One major change is that MeeGo will drop Firefox as the default web browser, instead using Google Chrome. The developers are also adding support for multitouch gestures which could make MeeGo a useful platform for tablet PCs.

But MeeGo ain’t just about netbooks and tablets. There’s also a version optimized for smartphones. The user interface for this version will be a bit more tightly packed to fit on smaller displays. But it shares some of the key elements of the netbook UI. For instance, you have those same tabs across the top of the screen for switching from one zone to another.

The smartphone version of MeeGo will apparently come with the Fennec web browser (Firefox Mobile) instead of Google Chrome. This is an interesting choice, since the default browser for Google Android smartphones is essentially a modified version of Google Chrome — so it’s clearly a viable option for Mobile devices based on a Linux kernel.

MeeGo isn’t simply an operating system. It’s also a framework that other operating system developers can incorporate into their own products. In other words, you could run Ubuntu, Xandros, Linpus, or Mandriva Linux while using the MeeGo user interface and MeeGo acceleration for Intel Atom chips. Under the hood the OS would still be Ubuntu, Xandros, Linpus or Mandriva and you should be able to install third party apps built for those platforms. And that’s why each of those groups, plus a number of other Linux developers as well as hardware companies such as Asus and Acer are on the list of groups supporting the MeeGo project.

You can find more info and screenshots of MeeGo for netbooks and smartphones at CarryPad.