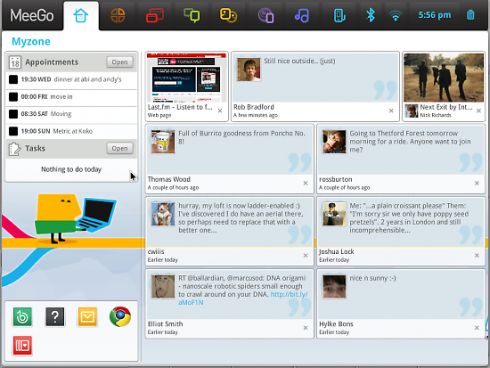 The developers of the MeeGo Linux project have launched MeeGo 1.1. While MeeGo is available as a standalone download, the group offers up the architecture for use in other Linux distributions as well, so it probably won’t be long before we start seeing versions of Linpus, Ubuntu, Fedora, and other operating systems using MeeGo’s custom user interface and performance optimizations for Intel Atom and ARM v7 processors.

MeeGo is based on the Moblin and Maemo Linux projects, and while Moblin was aimed at netbooks and Maemo at smartphones, MeeGo is available for both of those platforms — as well as in-vehicle entertainment systems.

The core operating system is the same for all three versions, but the netbook version comes with a set of applications and a user interface designed for laptop-style devices with 1024 x 600 pixel displays (give or take a few pixels).

The In-vehicle user environment looks completely different, as it’s meant to be navigated with your fingertips while you’re in a car. The focus here is letting you fin what you’re looking for quickly so you can get your eyes back on the road… there’s also support for speech recognition.

The handset version of MeeGo is still in an early development phase, but the team plans to launch MeeGo 1.2 in April with a more fleshed out Handset user experience with “a complete set of applications.”

There’s also a new MeeGo SDK 1.1 Beta which should be available soon for developers looking to write apps for MeeGo.