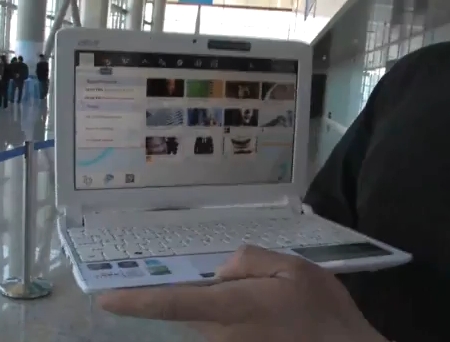 Intel has been showing off the MeeGo operating system at the Intel Developer Forum in China this week. MeeGo is the next generation of Moblin Linux (with a little help from the Maemo project), and it’s optimized for netbooks and other products with Intel Atom processors.

In the first video below, you can see MeeGo running on a standard netbook with an Intel Atom processor. If the user interface looks familiar, that’s because you’ve probably seen a netbook running Moblin Linux. MeeGo 1.0 looks virtually identical at the moment. You get the same widgetized interface which provides a program launcher and access to your calendar, email, tasks, social networks, and instant messages all in one place.

What’s more interesting is the second video which shows of MeeGo for several other platforms including a TV and smartphone. The Atom-based smartphone clearly has a smaller screen than a netbok, so while the user interface is similar and features a series of tabs to switch between different activities, everything the the UI isn’t quite as busy.

One of the niftiest new capabilities is a synchronization feature that lets you start watching a video on a netbook and then instantly resume watching the same video from the point where you left off on a TV or smartphone running MeeGo.

Intel also demonstrated a coupon machine running MeeGo hich you can use to download coupons to your smartphone. That’s not the sort of thing we’ve seen much in the US, but I hear it’s big in some parts of the world.

You can check out both demo videos after the break.