MediaTek has been talking about its upcoming Helio X30 processor for months. We already knew it would be the company’s first 10nm chip and that like the Helio X20 series chips it will replace, the new processor features 10 CPU cores.

Now the company is providing more details about the new chip, and how it differs from its predecessor.

We’ll have to wait a little before we can buy phones powered by Helio X30 chips though. MediaTek expects to begin mass production in the first half of 2017. 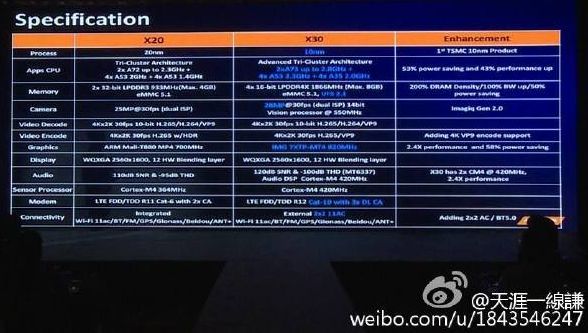 If you find yourself wondering why a smartphone processor needs ten CPU cores… well, it probably doesn’t. There are plenty of quad-core, hexa-core, and octa-core processors on the market which offer strong performance.

But MediaTek’s approach for its highest-performance chips is interesting: the two ARM Cortex-A73 CPU cores can offer high performance when necessary but they can shut off when they’re not in use. This not only saves power when you don’t need those CPU cores, but it can potentially save power when they are in use, since it lets your device get things done quickly… allowing those cores to shut down after a short period of burst performance.

Meanwhile, the ARM Cortex-A53 cores can kick in for sustained performance for less power-hungry tasks. And the even lower-power Cortex-A35 cores can take over when the phone is idle or performing activities that don’t need a blazing fast speeds, allowing you to get longer battery life than would otherwise be possible.